Brickipedia
Register
Don't have an account?
Sign In
Advertisement
in: Pages with reference errors, Class 4 articles, Articles with red bricks,
and 3 more

LEGOLAND Florida is a LEGOLAND amusement park built in 2011. It replaced the Winter Haven Park in Florida, USA. It opened on October 15, 2011. It is one of two current parks located in North America, the other park being LEGOLAND California Resort. In addition, the former Splash Island water park reopened as LEGOLAND Florida Water Park on May 26, 2012.

Merlin Entertainments (“Merlin”), Europe’s No 1 and the world’s second largest visitor attraction operator, announced today a multi-million dollar investment in the biggest family tourist centre in the world with the planned opening of LEGOLAND® Florida.

Merlin has purchased the historical Cypress Gardens in Winter Haven Florida from property investment company Land South Group and will open LEGOLAND Florida on the site at the end of 2011. The deal to buy the 145-acre site includes the freehold on the current theme park and water-park as well as an operating lease in perpetuity on the historic botanical gardens. Merlin plans a significant multi-million dollar investment over a number of years, up to and beyond opening, in what will be the biggest LEGOLAND to date. In line with the group’s “resort” strategy for its theme parks this is likely to include both accommodation and the addition of further branded attractions from the Merlin portfolio. This will build on the $100m invested over the last few years in improved infrastructure on the site.

"LEGOLAND Florida will be one of the most exciting and important projects Merlin has ever developed. It is a unique opportunity for us; Florida is the biggest family tourist centre in the world. We have been looking for the right site there for some time and in Winter Haven we plan to create one of the best and certainly most beautiful, theme parks in the world. LEGOLAND California has already proven how much US families love the unique LEGOLAND concept. Now we are bringing that fun and experience to a much wider audience - the millions of US and international visitors who come to Florida every year."

"LEGOLAND Parks are based on the universally popular LEGO Toy products and offer families the opportunity to let their imaginations run free and become completely involved in LEGO Experiences. A LEGOLAND Park is the ultimate platform to showcase the LEGO Values and the endless possibilities of the LEGO idea. LEGOLAND Florida will add a completely unique, exciting dimension and experience for families visiting the area."

"We are delighted at this news. We are extremely happy that the future of Cypress Gardens is secure. LEGOLAND is one of the most exciting names in family attractions and a welcome new addition to Florida."

"We are looking forward to working closely with Merlin. Their record speaks for itself. All of us at both local and State level really welcome their exciting plans for the site, the jobs this project will create and their commitment to the County long term."

Darth Vader, as he appears near the LEGO Studios Store

R2-D2, near the entrance of the LEGO Studios Store 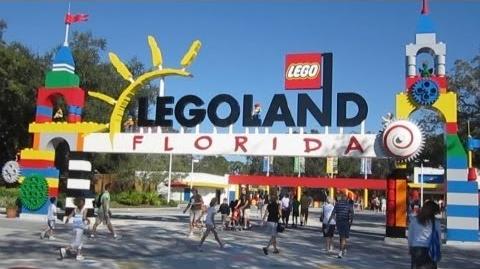