LEGO Batman: The Videogame is a video game developed by Traveller's Tales that was released on September 23, 2008. The Mac OS X version of the game was released in April 2009 by Feral Interactive.[1]

After each level, players can earn Extras by collecting a Red Power Brick. Characters such as Batman, Robin, The Joker, Catwoman, The Penguin, and Bane released in the toy range as well as new characters that are not in the LEGO Batman sets such as Batgirl, Mad Hatter, Clayface, Man-Bat, and Killer Moth are playable.

Batman starts in his standard black and grey suit and can wear a Heat Protection Suit, a Sonic Suit, a Glide Suit, and a Demolition Suit. Robin can wear a Tech Suit, a Water Suit, an Attract Suit, and a Magnetic Suit. When the player find those suits, they may obtain them in the Suit Swappers, or play as them in free-play. Batgirl can wear the same suits as Batman, and Nightwing can wear the same suits as Robin.

As in the other LEGO game series (such as LEGO Star Wars and LEGO Indiana Jones), once a player completes a level, that level is unlocked in "Free-play Mode". Free-play mode allows the player to replay any level they've completed with any characters they've unlocked, unlike Story Mode, which only allows players to switch between the characters involved in that scene. This permits access to areas containing extras the player was unable to get before.

A sequel, LEGO Batman 2: DC Super Heroes, was released on June 19th, 2012. It revolves around The Joker and Lex Luthor teaming up, and in turn Batman and Robin ally with Justice League members such as Superman, Wonder Woman, and Green Lantern.

Fifteen of Batman's enemies escape from Arkham Asylum and divide into three teams led by The Riddler, The Penguin, and The Joker.

The Riddler formulates a plan to rob the Gotham City Gold Reserves and briefs his team on the items they will need to do so.

He and Clayface travel through a parking garage and then through the city to a bank, where they blow off the front and Riddler takes a giant key. Clayface, however, is enamored by the gold and remains. When Batman and Robin arrive, Clayface is defeated. Batman chases Riddler until Clayface trips him and Two-Face arrives in his van to rescue Riddler. Unbeknownst to either of them, Batman plants a homing device on the van.

Riddler recruits Mr. Freeze to steal a freeze ray from Freeze's old ice cream factory, which they do. While Riddler wheels the ray off, Mr. Freeze releases the Freeze Girls from their cryogenic cases and uses them to assault the Dynamic Duo when they arrive. Batman defeats Mr. Freeze and the Freeze Girls, and Two-Face comes to pick up Riddler.

Batman and Robin chase Riddler and Two-Face's van in the Batmobile and Batcycle, and the van is destroyed. The villains split-up, and Riddler is cornered at the Gotham City Police Department, but rescued by Poison Ivy.

Riddler and Ivy make their way to the Botanic Gardens, where they steal mutant vine seeds, but Ivy remains - happy with all of the plants. She makes a stand against Batman and Robin, but is defeated like her predecessors.

Riddler and Two-Face break into WayneTech and escape with their Super-laser.

Meanwhile, in the Batcave, Batman, Robin, and Alfred solve Riddler's puzzles he has been leaving at each of the crime scenes, realizing he will rob the gold reserves.

Riddler and Two-Face freeze over the waterway to reach the island the reserves are held on and use the vine seeds to scale the cliff. When they aim the super laser at the door, it reflects and destroys the laser. Using a mind-controlled police helicopter, they gain entry and make their way to the vault with the giant key.

When they reach the Gold Reserves, the Dynamic Duo already finds it under siege. Entering through a window, they find Two-Face has covered a floor in toxins to prevent their advancement. Robin creates a swamp boat to cross using his Attract Suit, and they fight Two-Face until he flees. In the gold vault, they defeat Two-Face while Riddler uses the vault's defense laser, but it is destroyed. He attacks them himself or mind-controls the whimpering Two-Face until they both fall back into a pile of gold bars.

They are sent back to Arkham Asylum with cells next to Clayface, Mr. Freeze, and Poison Ivy. They are all strangely content, except for Riddler.

kPenguin assembles his team for a meeting on a submarine, which includes three of Batman's strongest enemies - Man-Bat, Killer Croc, and Bane - as well as himself and Catwoman. He introduces them to the Penguin Minions and explains how they can use them to take over Gotham City. However, they need a particular satellite and the Gotham Diamond to power it. The villains place boxes across the city in various areas, such as Commissioner Gordon's office and near the Fishmonger's truck.

Bane and Penguin leave for the docks, where they steal the satellite and place it on Penguin's submarine. Penguin ditches Bane, who is surrounded by Police Officers and becomes enraged. He throws a Police Car into the air, but it lands on himself.

Penguin and Catwoman travel by rooftop and destroy a Police Helicopter before they enter the museum. They steal the Gotham Diamond, but Catwoman refuses to give it to The Penguin. Before he can convince her, Police Officers arrive, and they split up.

While Batman and Robin chase Catwoman, Penguin and Killer Croc escape through the docks on their water vehicles. Catwoman is cornered and throws the diamond off the rooftop, where her cat below, Isis, takes it. Catwoman is taken into custody at the Police Station.

Shortly after, the Dynamic Duo finds Croc and Penguin trying to escape through the docks. They chase them in the Batboat and on Robin's Jet-ski until Penguin's submarine is destroyed. Croc and Penguin try to run through the sewer, but are cornered. Croc attacks Robin, and they escape. They make their way to the Police Station through the sewage system to rescue Catwoman (since Isis has brought her the diamond). Croc convinces her to give the diamond to Penguin. As Catwoman and Penguin flee with the diamond, Croc covers their flight as Batman and Robin arrive. Croc is defeated and drops a pamphlet for the City Zoo, revealing where Penguin and Catwoman are headed.

When they realize the Dynamic Duo has found where they are headed, Penguin and Catwoman flee to the Arctic World, where they set up the satellite while Man-Bat slows the heroes down. Man-Bat is wrapped in his own wings and subdued by Batman and Robin, but not before the satellite is powered and the Penguin Minions attack the city. Making their way through the Arctic World, the duo fights the minions and the returned Freeze Girls. By rerouting the Penguin Bombers in the villains' base, they stop the satellite, and the Penguin Minions become immobile. Penguin, Catwoman, and the Freeze Girls attack, but are defeated.

Back at Arkham Asylum, police place Penguin and Catwoman in cells next to Bane, Killer Croc, and Man-Bat.

Joker plans to spread laughing gas over Gotham City from the Cathedral and cause mayhem for Batman.

He sends Mad Hatter to Ace Chemicals to retrieve toxins while he and Harley Quinn set a trap for Commissioner Gordon. Hatter is defeated by Batman and Robin, while Harley and Joker capture Gordon.

Joker sends Batman a transmission of what they are planning to do to Gordon if Batman doesn't arrive to rescue him. Reaching the Amusement Mile, Batman and Robin make their way to rescue Gordon, defeating Harley Quinn. Joker, however, escapes in his helicopter.

While the Dynamic Duo tries to chase his helicopter down, The Scarecrow arrives in his Bi-plane to thwart the heroes' efforts. However, the bi-plane is shot down and crashes into Joker's helicopter. Both villains are left for dead, but they escape with giant balloons and crash through the Art Gallery's skylight. They try to escape, but Scarecrow is grabbed by a Police Officer in a crane. Joker escapes by using his laughing gas on an officer.

Killer Moth meets Joker outside, and together they make their way to the Cathedral. However, an enraged Gordon orders three mobile police headquarters to stop them. The villains defeat them all in the clown walker and rescue Harley Quinn. Gordon calls for Batman's help, and he quickly arrives in the Batwing. With the searchlight on, Moth is attracted to the light and stays, while Joker and Harley make their way to the Cathedral. Moth realizes the danger he is in and flees, but Batman and Robin chase him through the streets until he is cornered and left unconscious. When he comes to, Robin threatens him with bug-repellent, and he tells them Joker's plans.

At the Cathedral, the Dynamic Duo chase Harley to the top of the tower, where she and Joker hide in giant bells. Once they are found, Joker summons his helicopter to defeat Batman and Robin, but it is destroyed. The platform Harley and Joker are on collapses, and Harley is knocked unconscious. During the fight with Joker, the Clown Prince of Crime manages to win and uses his joy buzzer to defeat the Dynamic Duo. By the time Batman awakens, Harley is already revived. He throws a Batarang at the bells to disrupt the bats' echolocation, and they attack the villains. Robin awakens, and Gordon arrives shortly after to arrest the ne'er-do-wells.

Joker and Harley are placed in cells next to Mad Hatter, Scarecrow, and Killer Moth at Arkham.

Batman and Robin scale the side of Arkham, and Joker looks up at them and shakes his fist in anger. At the top, the Dynamic Duo sees the Bat-signal shine, aim their grapple guns, and move toward it.

LEGO Batman is set in its own universe but takes inspiration from different movies, comics, and the DC Animated Universe. Important events such as Knightfall (where Bane breaks Batman's back and Azrael takes over for a short period) and No Man's Land (where an Earthquake has ravaged Gotham) are alluded to. Others, such as The Killing Joke, are omitted as Barbara Gordon is still ambulatory and operating as Batgirl (however, Joker's tropical costume is still included).

The characters' origins are either based on comic book versions, such as Mad Hatter and both versions of Clayface. Others, like Mr. Freeze, are more inspired by Batman: The Animated Series.

♣ indicates a character who only appears on DS versions of the game.

In the 2013 set, 76001 The Bat vs. Bane: Tumbler Chase, a code came in every box that could be entered online for a free PC downloadable copy of this game. The offer was valid until December 21, 2014.

Joker Cards are collectible cards on the game for Nintendo DS. There are 30 cards for each of the 30 levels. Below is the list of the things on the cards in order.

Differences between the Platform and Nintendo DS versions

Several differences between both versions of the game's story levels.

References to Other Batman Media

Though material is taken from the comics, LEGO Batman is mainly inspired by Batman media, such as films and television. The most heavy inspiration comes from the Burton/Schumacher film series and the Batman: The Animated Series. 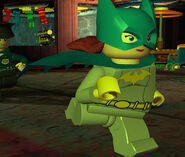 Batman in an action shot

The Penguin and Killer Croc

Batman and Robin against a wall

The Scarecrow and Mr. Freeze

Batman and Robin on a tightrope obove Riddler Goons.

Bane and The Penguin

The Riddler attacking a Police Officer

Two-Face and The Scarecrow