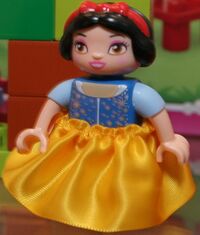 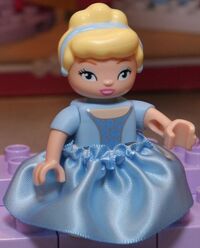 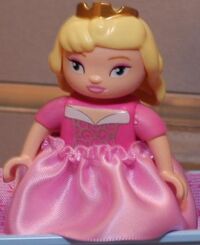 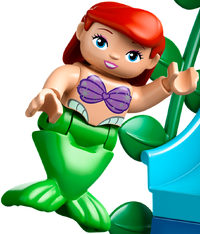 Main article: Ariel
The heroine of the 1989 film The Little Mermaid, is loosely based on the Danish fairy tale "Den Lille Havfrue" by Hans Christian Andersen. The daughter of King Triton, ruler of the sea, 16-year old mermaid Ariel falls in love with a human prince named Eric. She has always dreamt of life on land and she finds Ursula's deal her only chance to be with Eric, that's why she trades her voice to the sea witch, Ursula, in order to become a human and be with him forever. However, Ursula was not who she seemed. So Ariel and Eric defeat Urusla and Ariel becomes human. 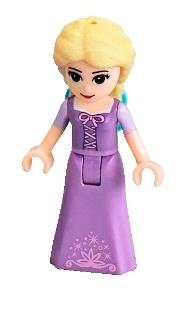 Main article: Rapunzel
The heroine from the 2010 animated feature Tangled is loosely based on the German title character from the Brothers Grimm fairy tale "Rapunzel". Her long hair, which is said to measure 70 feet in length, and 10 feet while braided. Her hair has magical healing powers, and can also be used as a weapon. Given the power by a magic golden flower, Mother Gothel kidnaps her as an infant to use her power to keep herself young. 18 years later, Rapunzel sneaks away from her tower with a thief, Flynn Rider, and sets on her own journey to find the flying lanterns that float into the sky every year on her birthday. To free her from Gothel's clutches, Flynn cuts her hair, thus destroys her power, and she is returned to her family. Even though LEGO's Rapunzel is based nf her appearance in the movie her hair is less taen ten feet when braided. 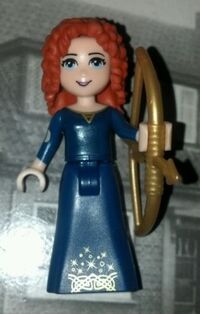 Main article: Merida
The main character of the 2012 Disney Pixar animated feature Brave is the first original princess in the line-up that not inspired by either literature (Snow White, Cinderella, etc.) or real-life (Pocahontas, Tiana). Merida is the teenage daughter of Queen Elinor and King Fergus. Queen Elinor's expectations and demands of her daughter make Merida see Elinor as being cold, unfeeling, and distant causing friction between the two. Despite Elinor's desire to see Merida as a proper royal lady, Merida is an impetuous tomboy with wild, unruly hair and a passionate desire to take control of her own destiny. Merida has skills with the bow and is the most skilled archers in her kingdom. She is also well trained in sword-fighting and an expert horsewoman, riding wildly across the countryside on her horse, Angus. Among other Disney princesses, Merida has a unique status. She is the first princess from a Pixar film and the only female Pixar protagonist made by LEGO. She never sings a major song in the movie, thus breaking away the traditional line-up, though as a child, she sang a small verse of a song in Gaelic. Merida's rich Scottish brogue makes her the second Disney Princess with an accent. 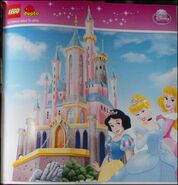 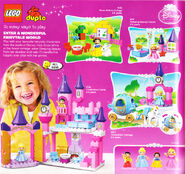 Add a photo to this gallery
Retrieved from "https://brickipedia.fandom.com/wiki/LEGO_Disney?oldid=1988723"
Community content is available under CC-BY-SA unless otherwise noted.