Brickipedia
Register
Don't have an account?
Sign In
Advertisement
in: Class 4 articles, Sets listed for ages All, Pages needing citation,
and 3 more

LEGO Fun Snacks were fruit-flavoured snacks shaped like 2x2 LEGO bricks created by Kellogg's and released in 2007. They were removed from stores as they looked similar to bricks and so were considered a choking hazard. Therefore, the snacks were given negative reviews. [source?] Each pack contained approximately twelve fruit snacks in the shape of a brick per pack, with a total of ten packs.

The LEGO Fun Snacks contained six flavours, for which it was advertised to "Build New Flavors" 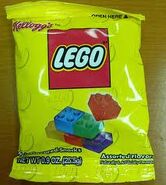