LEGO Fun to Build is a videogame title from SEGA for the SEGA Pico and licensed by The LEGO Group. This game was released exclusively in Japan in December of 1995. For context, the SEGA Pico was an educational console from 1993 to 2004 that utilized a stylus touch screen and five buttons. The game is inserted into the console like a cartridge, and pages from the cartridge can flip back and forth between levels to play different minigames. This would be read on the system by a motion sensor.

Like most SEGA Pico games, this one allows access to multiple levels with the turn of a page. Each of the levels are based on LEGO themes of the time, including Town, Aquazone (specifically Aquasharks and Aquanauts), Castle (specifically Dragon Knights and Lion Knights), and Space (specifically Spyrius and Ice Planet). The last page level is a free build mode in which the player can use common LEGO pieces to build their own model, as well as draw on a snapshot of the completed project.

''Fun To Build'' offers 4 levels with 5 building puzzles (with the exception of Space having 6) and some followed by 1 of 4 types of minigames. The building puzzles show an order of steps to follow to complete building different LEGO models. The order is demonstrated opposite of how it should be assembled, and the player must choose among the 6 parts which to add next to complete the model. A score will be shown for how many seconds it took to build the model. The lower the score, the better the record.

Some of these building puzzles will be followed with a minigame. Below is a breakdown of each level and which puzzle leads to a minigame: http://segaretro.org/File:LFTB_pico_jp_manual.pdf

Free Build Mode allows the player to create their own model out of digital LEGO pieces, or customize an existing model featured in the game. Players can change the color and orientation of each brick, as well as the camera angle of their model. Once the model is completed, there is an extra screen to draw or add new elements to the model, including brushes with multiple colors, minifigures, animals and plants to spruce up the drawing. There are even buttons to remove all drawings or remove all bricks from each segment.

Sets that appear in the Game 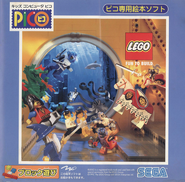 Inside of case and Castle page of cartridge

Most Sega Pico games had a turquoise case

Back of turquoise case

Less common is a white case for this game.

An example of the building minigames.
Add a photo to this gallery