LEGO Indiana Jones 2: The Adventure Continues is a 2009 video game developed by Traveller's Tales and published by LucasArts. The game was released on November 17, 2009 for the Nintendo Wii, Xbox 360, PlayStation 3, Nintendo DS, PlayStation Portable and Windows PC.

The Mac OS X version of the game was released by Feral Interactive on 16 May 2011.[1] There was going to be a PlayStation 2 release of the game, but it got cancelled most likely due to the system losing its popularity.

The levels from the original game are tweaked, and new ones have been added, e.g. the Shanghai car chase from The Temple of Doom.

The game allows gamers to play a "tongue-in-cheek take on all four cinematic adventures,"[2] including the latest film in the franchise, Indiana Jones and the Kingdom of the Crystal Skull, which was not included in the previous game. The gameplay will consist of the same drop in/out co-op play as all of the previous game, but will have a split screen function, which will appear when one character goes off screen, and disappear when the character gets closer to the second one. Another new feature is the level builder, were you can make your own adventures by creating levels and linking them in a chain. This feature though was only used once more in Lego Harry Potter Years 1-4 before it was removed in all future Lego video games afterwards. The main process is to choose environments, and place various levers, push boxes, buttons and weight plates and link them by a red line to traps and mechanisms, with the line disappearing once the level is being played. Props, such as tents, boxes, statues and plants, and enemies and bosses such as guards and spiders can be placed, as well as water, lava, and quicksand. There are new level hubs, but instead of one, like Barnett College in the first, there are one for each of the movies.

The game is less accurate to the original and the Crystal Skull movies, because the story line put into the game doesn't consist of what had happened in the movies; this includes several monster boss battles, monkeys stealing the sunstones, Indiana Jones being ambushed by Russians aboard a train, Oxley being kidnapped by the Ugha, and the Well of Souls being directly underneath the maproom.

Each movie contains two puzzle levels, one involving a boss, a vehicle chase, a brawl, and a giant boss battle. Each level is only one room long. Most of the game's boastings are about the level builder, split screen, and Kingdom of the Crystal Skull.

This game, however, includes some disabilities including being unable to view cutscenes when not in levels, lack of secrets in the main levels, returning to hub after each level, few characters and customizable parts, five levels instead of six for a movie, and also shorter levels. After completing a level, players would return to the hub and the entrance to next level would be discovered, sometimes involving a character unlocked in a level. Also, after beating a story level, a treasure mode replacing free play becomes available, where the players would need two different characters to pass a puzzle and retrieve an artifact. Artifacts can be found in bonus levels. After collecting all ten artifacts, a super bonus city level would be unlocked.

The DS and PSP versions did not feature levels from the first three movies, and it didn't include the level creator. Additionally, there were no cutscenes at all.

The game also had multiple characters that did not appear in the console and PC versions. 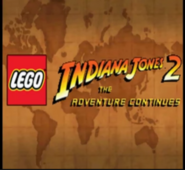