LEGO Knights' Kingdom was a video game released in 2004 exclusively for the Nintendo Gameboy Advance. The game was developed by Razorback Developments and published by THQ. The game is played as a top down action game through the perspective of four knights of Morcia (Jayko, Danju, Rascus, Santis), on a quest to find the Heart of the Shield of Ages and rescue King Mathias from the evil Vladek.

Each game was packaged with playing cards much like the Knight's Kingdom sets of the same year.

This game has also been repackaged with Bionicle: The Game for a 2-in-1 release also for the Nintendo Gameboy Advance. Each game is packed into one catridge and play the same as their respective releases. 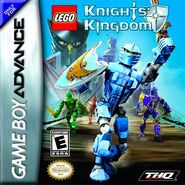 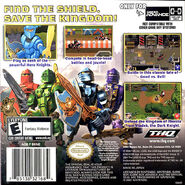 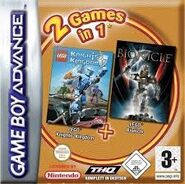 Retrieved from "https://brickipedia.fandom.com/wiki/LEGO_Knights%27_Kingdom_(game)?oldid=1876909"
Community content is available under CC-BY-SA unless otherwise noted.