LEGO Racers (often called LEGO Racers Mobile) is a mobile phone exclusive kart racing Video Game based on popular LEGO themes that was released in 2007. There are five playable characters and fifteen tracks.

This game is not to be confused with the PC, PlayStation and Nintendo 64 games of the same name.

There are fifteen tracks in the game, and five themed environments.

There are several kinds of pickups in the races. 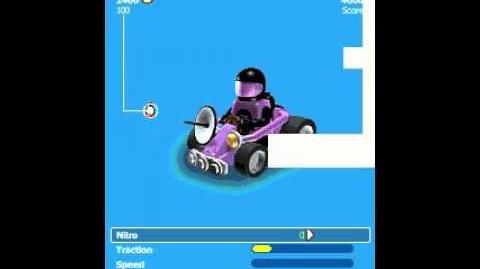 LEGO Racers (2007 Mobile Game)
Playthrough (with Soccer Mania music dubbed in due to the lack of music in the actual game's races)
Add a photo to this gallery
Retrieved from "https://brickipedia.fandom.com/wiki/LEGO_Racers_(mobile_game)?oldid=1900740"
Community content is available under CC-BY-SA unless otherwise noted.