LEGO Racers CC was a canceled video game set for release in 2004 for PlayStation 2 and Xbox. The only known information about it comes from ads in some June - December 2004 LEGO catalogs (UK, Germany, the Netherlands, Russia, and possibly others).

The vehicles in the game have a style similar to that seen in the Drome Racers comics and LEGO Racers 4D, with inspiration taken from real LEGO but an overall more realistic aesthetic. Some of the vehicles seem to take elements from the pullback motor Drome Racers sets of 2004, such as 8384 Jungle Crasher, though none of the vehicles in the ad match real sets exactly. For example, some car parts in the car builder screenshots resemble real LEGO pieces, like the engine piece 41862, rollcage piece 47758, and curved slope piece 30602 on the side, all of which were used in 2004 Drome Racers sets in such fashions.

It should be noted that this game is separate from Drome Racers 2 (also known internally as LEGO Racers 4), a game by ATD that was canceled in 2003. It's impossible for ATD to have been involved with LEGO Racers CC as the company closed down entirely in 2003, while this game was developed and set for release in 2004. Additionally, a developer from ATD has affirmed that LEGO Racers CC is "definitely not" the same game as Drome Racers 2. The developers of LEGO Racers CC are unknown, making recovery of any further information on it difficult. Yet another unrelated LEGO racing game, LEGO Racers: The Video Game, was advertised in 2008/2009, but canceled. 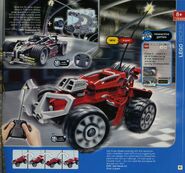 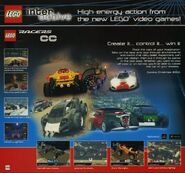 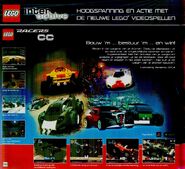 Dutch version of the ad 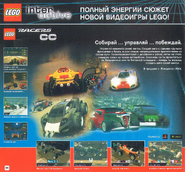 Russian version of the ad