LEGO Rock Band is a music video game released in late 2009 by TT Games (Traveler's Tales Games). It is a Lego version spin-off of Rock Band series developed by Harmonix. Characters include the selection of original characters, existed celebrities from Rock Band series, and also several Lego line characters. The platforms that are available to play the game are the Nintendo Wii, Nintendo DS, Xbox 360, and Playstation 3.

A promotional trailer was pubished prior to the game's release. The trailer features the characters from the game driving or flying through various LEGO landscapes, like a city or the sea, while playing rock music on their instruments. One of their vessels, the Rock Band Bus, is available as downloadable building instructions. Several past and present LEGO sets appear in the trailer as well, such as 4958 Monster Dino (in green), 6285 Black Seas Barracuda and 7236 Police Car. The blue bus and the airplane only appear in the trailer. This trailer also appear in the game as the introduction sequence.

Like other Rock Band games, the Story mode follows the player's band through their career, starting by playing gigs at smaller venues and taking requests for special performances. Different from the original ones, the story also adds Lego-ish adventure elements. The default band members are Sir Thomas, Penny Twilight, Nicky Overdrive and Quentin Lance from Rock Band 2, but after prologue you may unlock and buy other band members to replace the original four via "Rock Shop".

In addition to the list above, Lego Rock Band also supports a total of 539 songs from the game's back catalog of downloadable content, as well as imports from the first Rock Band game considered "Family Friendly" (exporting songs from Rock Band 2 is only possible into Rock Band 3). "Hysteria" and "Rock 'n' Roll Star" are featured only in the European version of Rock Band, while the other 22 songs are available across all versions of the game.

Rock Power Challenges are challenges in the video game. If they are completed, you can unlock new vehicles, performances, characters and other stuff.

Sets appearing in the video game

The LEGO Rock Band game has been released for several consoles:

Concept art for the game by Pete Lyon 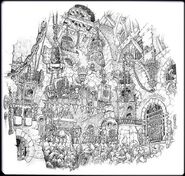 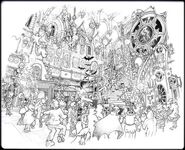 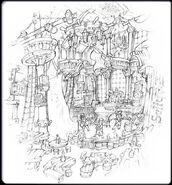 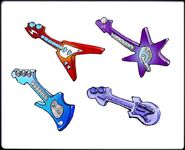 Queen as they appear in the game.

David Bowie as he appears in the game.

Iggy Pop as he appears in the game.

Blur as they appear in the game.

Retrieved from "https://brickipedia.fandom.com/wiki/LEGO_Rock_Band?oldid=1958412"
Community content is available under CC-BY-SA unless otherwise noted.