LEGO Rock Raiders is a video game based on the Rock Raiders theme. There are two versions of this game with the same name, on two different platforms.

The PC game is a real-time strategy similar to Dune II, and was the first video game for the Rock Raiders theme. The game opens with optional training missions and one "real" mission unlocked. The Chief explains the briefing of each mission. Most missions require the player to collect a certain amount of Energy Crystals. The required number of Energy Crystals during missions starts low, but gradually gets higher in later missions as a result of increased workload. Some missions require the player to locate fellow Rock Raiders that have been trapped in landslides, or to find certain pieces of equipment and bring them back to base.

At the end of each mission, Chief evaluates the player's work, examining various aspects of the mission. With all these taken into consideration, Chief gives a mission rating percentage.

There are twenty-five missions in total, with each of them taking place in either a rocky, volcanic or icy cavern environment. It is not necessary to complete every mission with 100%, or even complete all the missions, to complete the campaign.

The website www.rockraidersunited.org is a fan site of the LEGO Rock Raiders PC game. Members of the site post modifications of game levels on the forum and create new objects for use in the game.

Unlike the PC game, the PlayStation game is an action and strategy game, in which the player controls a main character (i.e. Jet, Axle, Docs, Bandit or Sparks) instead of commanding a squad. Also, unlike the PC release, which is centered around constructing a base and mining, the PlayStation release centers around exploring the mission environment.

There are eighteen campaign missions and six multiplayer missions in the NTSC version. The PAL version includes eighteen different one-player and two-player missions, and three one-player bonus missions that are accessible after the campaign is completely finished with every mission completed to a Gold Medal standard (see below).

The player also has to remember the password (by keeping it as a record) to load the game's progress instead of just saving a game save file for it onto the computer's hard drive (or a PS1 memory card in this case) and loading it to continue the game.

A wallpaper based on the game

Another wallpaper based on the game

An advertisement for the game

A double page advertisement for the game 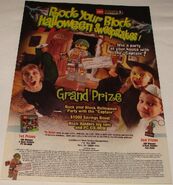 An advertisement for the game with a Halloween contest 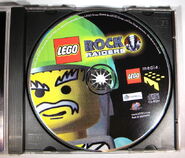 The CD of the game that shows The Chief
Community content is available under CC-BY-SA unless otherwise noted.
... more about "LEGO Rock Raiders (Game)"
RDF feed
ArticleRating
4 +
Developers
Data Design Interactive +
Genre
Real-Time Strategy (PC)
Action (PS1) +
Image
5708 LEGO Rock Raiders - PC CD-ROM.jpg +
Item №
see Versions +
Platforms
Windows PC, PlayStation +
Price
see Versions +
Publishers
LEGO Media +
ShopDescription
Stranded in orbit around an uncharted p … Stranded in orbit around an uncharted planet, the crew of the LMS Explorer is faced with the challenge of establishing a base camp beneath the planets surface.</br></br>Your mission is to take command of the Rock Raiders team and navigate the Rock Raiders' vehicles through 29 exciting missions. Explore underground caverns in 3 different types of terrain - Rock, Lava and Ice - in a quest to mine enough Energy Crystals to re-power the LMS Explorer and get the Rock Raiders back home safely.and get the Rock Raiders back home safely. +
Theme
Rock Raiders +
Title
LEGO Rock Raiders +
Date"Date" is a type and predefined property provided by Semantic MediaWiki to represent date values.
1999 +
Advertisement