The LEGO Star Wars: The Padawan Menace is a television special based on the Star Wars Theme, that aired on Cartoon Network on July 22, 2011. The special was released on DVD and Blu-ray on September 16, 2011. The Blu-Ray edition came with an exclusive Ian (Young Han Solo) minifigure.

Grand Master Yoda has just arrived back on Coruscant from the Outer Rim with a group of Jedi Younglings on a field trip. They arrive at the Senate Building to take a tour, but Yoda, sensing trouble, goes on ahead, leaving the tour group to be led by C-3PO and R2-D2. As they enter, a young child who had snuck away from an orphanage manages to get into the building and joins the group on their tour. Meanwhile, Asajj Ventress is in the Senate Building, having just stolen secret battle plans with the intention of delivering them to Palpatine and plan an attack on Coruscant.

While on the tour, the young child, now known as "Ian" stirs up trouble causing C-3PO, R2-D2, and the rest of the younglings to flee into space, where they find themselves in the middle of a space battle between Republic and CIS forces. While avoiding destruction, and with a quick check in on Anakin Skywalker and General Grievous fighting, they accidentally end up on Obi-Wan's hyperspace ring sending them to Tatooine. During which time Yoda and Commander Cody battle with Ventress and a small group of battle droids.

On Tatooine, C-3PO, R2-D2, and the other younglings look for passage off planet and back to Coruscant after their ship is scavenged by jawas while 3PO had his back turned. After heading to Mos Eisley Cantina C-3PO sneaks in, disguised in a cloak so he is not seen as a droid, in the hopes of finding a ride, meanwhile the younglings are mistaken for the cantina band. When C-3PO is seen to be a droid the group turns to run, but the two droids fall into a wall which Jabba the Hutt is behind. They are captured and sent to Jabba the Hutt where the younglings are caged and C-3PO has to fight R2-D2 for Jabba's amusement. After encouragement from the younglings, the two droids help free the children and escape custody of Jabba.

Ventress is captured but a battle droid escapes on Darth Maul's Sith Infiltrator with the plans, causing Yoda and Cody to go into pursuit. While in space it is revealed that Ian had sneaked aboard Yoda and Cody's own T-6 Jedi Shuttle. The Sith Infiltrator was tracked to Hoth where Yoda and Ian go after the plans. In the cold they find a tauntaun for shelter in which they find the battle droid with the plans hiding. After recovering the plans they are attacked by Destroyer Droids, and after a brief battle, (and quick rewiring/rebuilding) escape with the plans and head back to Coruscant, after picking up the others off of Tatooine.

They arrive back on Coruscant where they are rewarded for bravery and in the end it is revealed that Ian's name is Han Solo and that the "H" on his name tag was sideways, while Admiral Ackbar shouts, 'ITS A WRAP!".

The special was released on Blu-Ray/DVD combo pack on September 13, 2011. Both the Blu-Ray and the DVD featured The Padawan Menace, and the bonus features The Quest for R2-D2, Bombad Bounty, Both parts of "Star Wars in 2 minutes", and some of the Online Clone Wars Comics. 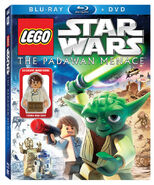