In 1934, the first logo was created by the LEGO Group. It was used on correspondence, shipping labels and other printed materials, but not on toys. Starting in 1936 an ink stamp “LEGO Fabriken Billund” was used on the wooden toys.

This logo was first introduced in 1939 or 1940. It was used extensively on wooden toys, typically in the form of an applied decal, for the next 10 years.

This logo was introduced with the first plastic toys.

During 1953, all three of these logos were used.

The first of the oval logos. This appeared on LEGO Mursten catalogs. The company had still not standardized on colour. Examples exsists in several colours, typically depending on the colour of the catalog.

This logo first appeared on the System i Leg sets. The original logo was appears to be hand drawn and is different on various boxes from early 1955.

The classic dogbone logo from late 1955. It was the first time the logo was standardized, in terms of both design and colour. It was used across all toys lines and appears widely on both plastic and wood toys.

The first of the square logos. This and many variants were used worldwide for the next 13 years.

A variation of the 1960 logo. Includes the colour bars (red, yellow, blue, white, and black) and was the first to include the registered trademark as part of the LEGO name.

This logo appeared in 1973, the same year that LEGO began its own production and distribution in the US. It represents an attempt to standardize on a single worldwide logo and remains the most recognizable version of LEGO’s brand identity.

A redesign, or in LEGO's words, a “graphic tightening”, of the 1973 logo to allow for better digital (i.e. internet) reproduction.

The original LEGO logo created in 1934

Another LEGO logo used during the year 1946

The LEGO logo during the year 1948 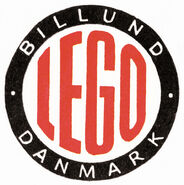 The logo used by the LEGO during 1950 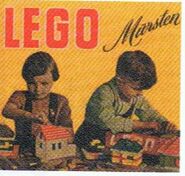 Another LEGO logo in 1958. Note the blue colour

Yet another logo used by the LEGO company in 1958

The LEGO logo as we know it today (1998 - present)
Community content is available under CC-BY-SA unless otherwise noted.
... more about "LEGO logo"
RDF feed
ArticleRating
4 +