Brickipedia
Register
Don't have an account?
Sign In
Advertisement
in: Class 3 articles, Minifigures introduced in 1989, Pirates minifigures,
and 2 more

In her original appearance, Anne wears a bright blue bandana. The rest of her clothes are white, although her torso is decorated with a red corset, red bead necklace, and two black belts with yellow buckles. Her face is detailed with black hair and large red lips. She has a rather youthful appearance when depicted as a human in the Ladybird Books illustrations.

Lady Anne Anchor's updated minifigure retains the overall aspects of her original design, but with greater detailed printing on her face and torso. She no longer wears a bandana, instead possessing a black hairpiece. Her torso and legs are recolored bright red and brick yellow, respectively.

Anne was the daughter of Bessie, a widow who owned the "Keg and Cutlass" inn on Forbidden Island. She is a fearless pirate who takes part in the adventures of Captain Redbeard's crew aboard the Black Seas Barracuda whenever she can.

In Adventure on Shark Island, Anne tricks Captain Foul into thinking his ship is under attack to break up a fight between his and Redbeard's crews, but Foul takes revenge on her by kidnapping her and demanding a ransom. As Redbeard refuses to pay ransoms (and did not have the money anyway), her crewmates manage to stage a rescue and outwit Foul.

In The Royal Visit, Anne helps Bo'sun Will realize that Jonah's pet jackdaw has been missing since his owner's escape from Port Royal. Once badge of office is found, Anne disguises herself as a washerwoman and smuggles the badge into Eldorado Fortress with the Governor's laundry.

At Barracuda Bay, the older Lady Anne Anchor has grown into the role of Captain Redbeard's right hand.[4] She keeps the crew and ship ready whenever Redbeard is out at sea. 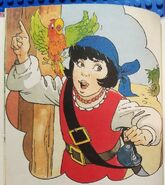 An illustration of Anne in Adventure on Shark Island

Appearances
6251 Pirate Mini Figures
6285 Black Seas Barracuda
6286 Skull's Eye Schooner
10040 Black Seas Barracuda
21322 Pirates of Barracuda Bay +
ArticleRating
3 +
Image
21322 1to1 01 01.jpg +
Img1
Pirate girl Anne.png +
Img2
21322 1to1 01 01.jpg +
InfoboxTemplate
Minifigure +
ShopDescription
Anne, the daughter of Bessie, landlady at the inn on Pirate Island. She is a fearless pirate and loves to take part in Darkshark"`UNIQ--nowiki-00000007-QINU`"s adventures whenever she can +, Lady Anchor
Lady Anne Anchor was one heavy-hitting swash-buckler. She kept the crew at bay, held things down and made sure everything was ship-shape when Redbeard was at sea. +  and Captain Redbeard has been named in LEGO … Captain Redbeard has been named in LEGO lore for decades. But where did the names and backstories for the rest of the crew come from?</br></br>Austin: Most of the pirates are based on previous pirates that came before. Because of certain things, some of their names had to be changed but I believe most fans will recognize them. Milan, Sam, and I tried to expand the previous lore of LEGO Pirates and a good one to point out is the evolution of Anne! If you remember the Ladybird books she was a pirate girl who often gotten in mischief with Redbeard’s crew. Now with plenty of time passing she has grown to be more of a right hand for Redbeard. She lost her blue bandana but she still sports a red outfit.bandana but she still sports a red outfit. +
Theme
Pirates, Ideas +
Title
Lady Anne Anchor +
Txt1
Pirates +
Txt2
Ideas +
Years
1989, 1993, 2002, 2020 +
Advertisement