Brickipedia
Register
Don't have an account?
Sign In
Advertisement
in: Class 4 articles, Minifigures introduced in 2012, Minifigures (theme),
and 5 more
English 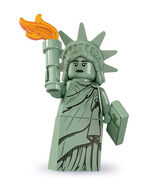 Deutsch Français
Community content is available under CC-BY-SA unless otherwise noted.
... more about "Lady Liberty"
RDF feed
Accessories
Torch
Tablet with Inscription +
Appearances
8827 Minifigures Series 6 +
ArticleRating
4 +
Image
Col084.jpg +
InfoboxTemplate
Minifigure +
ShopDescription
“Give me your tired, your poor, your hu … “Give me your tired, your poor, your huddled Minifigures yearning to build free!”</br></br>Lady Liberty is a symbol of creative freedom to all Minifigures, no matter their theme of origin. Holding her torch up high – and sometimes waving it around when she gets really excited – she is a beacon of inspiration to all who see her.</br></br>Lady Liberty protects against oppression of all kinds. Villains and tyrants may try to topple her, but she always stands tall (well, as tall as any Minifigure, anyway), stirring the hearts of patriotic citizens everywhere to build bigger and grander brick creations than ever before. grander brick creations than ever before. +
Theme
Minifigures
Series 6 +
Title
Lady Liberty +
Years
2012 +
Advertisement