Lady Robot is a Minifigures Series 11 minifigure released on September 1, 2013..

The Lady Robot has the Clockwork Robot's head piece, but printed with make-up designs. Her torso, head, legs, and arms are grey. Her torso is designed with gadgets and dials on it in yellow and pink colouring. Her hips and hands are also pink, and her legs are printed with a skirt design.[1]

She appears to be the female version of the Clockwork Robot from Series 6. 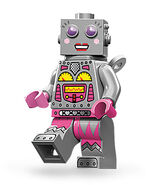 Retrieved from "https://brickipedia.fandom.com/wiki/Lady_Robot?oldid=1579041"
Community content is available under CC-BY-SA unless otherwise noted.