Lamb is a creature introduced in the Friends theme in 2014. So far it is exclusive to 41029 Stephanie's Newborn Lamb set in.

The Lamb has its own exclusive mould. The creature is standing, its front legs joined as well as hind pair, its face is smiling. It has curly fleece and short tail. It is mostly white, with a pink nose, blue eyes and long eyelashes. There is a little hole at the top of its head where some accessories can be put.

The Lamb lives in a small sheepfold. It is attended by Stephanie with as much care as a vulnerable newborn Foal is looked after by Olivia. 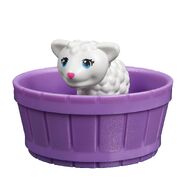