Lao Che is a Chinese gangster who wanted to kill Indiana Jones. He has two sons named Chen and Kao Kan. He also appears in LEGO Indiana Jones 2: The Adventure Continues. Lao Che is the chief of the Shanghai Gangster. He is only found in one level of each game.

In one of the Indiana Jones books, Indy freed Wu Han from his service by stealing his ancestor's ashes, leaving Lao Che with a grudge against him. Lao Che also tried to kill him in the second movie. 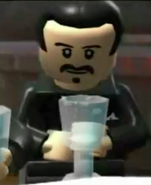 Add a photo to this gallery
Retrieved from "https://brickipedia.fandom.com/wiki/Lao_Che?oldid=1951680"
Community content is available under CC-BY-SA unless otherwise noted.