Lasha is a Ninjago minifigure released in 2012. According to the card in his spinner, his dominant element is lightning. He is a scout of the Venomari snake tribe, but lost one of his eyes.

Lasha is lime-coloured, and has a new cobra flap headpiece, the same used for Rattla. He has lime legs, a hip piece, torso, arms, head, and "hood" piece. His hands are black. His torso printing has scaly skin and a green bandolier, which has red vials of venom hanging from it. His head has a lime green snake face printing. Lasha appears to be missing an eye also, with scars covering the wound.

The Juniors version of Lasha has a new face print and has armor on its torso and leg pieces which resembles the armor worn by Clancee and Nadakhan's crew.

Lasha in the back of instruction manuals 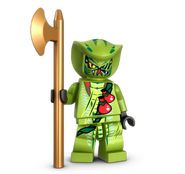 As a kid in Corridor of Elders.