"I should really get a move on, but it's just so nice here..."
―Lawn Gnome

The Lawn Gnome is a Collectable Minifigure released in 2011, as part of 8804 Minifigures Series 4. He comes with a green elf hat, a scruffy white beard, a red torso, and short blue legs. He also includes a brown fishing pole with no fish.

The Lawn Gnome has a green cone-shaped hat, his face is yellow and he has wrinkles and a white fuzzy eyebrow. Under his face, he has a scruffy white beard, and he has a red torso with a black belt with a gold buckle. He has short blue legs. He also has a brown fishing pole as his accessory. 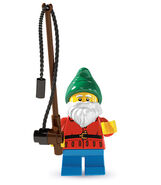 Deutsch Français
Community content is available under CC-BY-SA unless otherwise noted.
... more about "Lawn Gnome"
RDF feed
Accessories
Fishing Pole Beard (White) +
Appearances
8804 Minifigures Series 4 +
ArticleRating
3 +
Image
col049.jpg +
InfoboxTemplate
Minifigure +
ShopDescription
"I should really get a move on, but it' … "I should really get a move on, but it's just so nice here..."<br />The Lawn Gnome is quite happy to stand perfectly still and watch the world go by. As long as the view stays interesting and the weather isn't too bad, he'll stay in one place for years on end, not budging even an inch no matter what may happen around him.This may lead you to mistakenly believe that the Lawn Gnome is merely a statue. But the joke's on you if you pick him up and carry him home to your front yard, because if you don't give him something interesting to look at, he'll pack up his fishing pole and pointy green hat and be off on his way!nd pointy green hat and be off on his way! +
Theme
Minifigures
Series 4 +
Title
Lawn Gnome +
Years
2011 +
Advertisement