Leatherhead is a Teenage Mutant Ninja Turtles minifigure introduced in 2014.

Leatherhead has a pair of deep green legs with small brown stripes and white printing representing his underbelly, and a new mold for his head and torso which juts outward to the back and is dark green like his legs, but his belly is white, continuing from his legs. He has a pair of green arms which are presumably posable and a head which resembles the mould for a crocodile, but with white on the lower jaw. His back is textured with spikes, scales and a tail.

Leatherhead was a baby alligator taken in by a street orphan. Later, he was lost and the Kraang found him and took him to their dimension, where they performed experiments on him and mutated him into what he is now. He managed to escape his prison and stole the power cell from the Kraang portal. On Earth he took refuge in the sewers, but the Kraang found and tortured him. The turtles rescued him and took him to the lair. Leatherhead broke out, believing the Kraang were attacking him. Later on Michelangelo found and calmed him. He explains the Kraang mission and warns them to safeguard the power cell. Later, the turtles fail and Leatherhead agrees to participate in their plan to infiltrate the TCRI building, our rather Kraang headquarters. He distracts the Kraang but the turtles fail to damage Traag, a stone guardian statue. Leatherhead drags Traag into the portal with him in an effort to keep the Earth safe.

Leatherhead would reappear in subsequent episodes of the series, fighting alongside the Turtles and eventually becoming part of the Mighty Mutanimals. 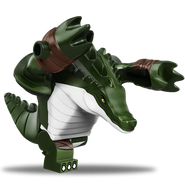