Brickipedia
Register
Don't have an account?
Sign In
Advertisement
in: Class 3 articles, Legends of Chima, Themes introduced in 2013,
and 5 more
English

Legends of Chima is a theme introduced in 2013. The theme features a world called the Land of Chima, which is populated by 22 tribes of anthropomorphic creatures. A war threatens to destroy their friendships and land. This theme was originally going to replace Ninjago, but in the end, both of the themes were kept in production, though Legends of Chima only lasted until 2015. Nine regular sets were featured in the first wave, in addition to six Speedorz sets with more gradually being released throughout the year.

Speedorz is a game introduced with the theme which includes one-wheeled bikes, called "Speedorz", powered by a rip-cord. The game involves completing challenges and surpassing obstacles to earn CHI crystals, the mineral the animals are fighting over in the story of the TV series.

On January 16, 2013 Legends of Chima: The Animated Series premiered with two pilot episodes.[1] The series continued again half-way through 2013, when the second wave of sets were released. A second season was released along with 2014's first wave of sets and a third season was scheduled for August 9, 2014 to coincide with the second wave.

One defining trait of the Legends of Chima theme is the animal-motif used by nearly every set in the line. Vehicles and structures feature the head-shape, outline, or both of their respective tribe's patron animal. Several vehicles also include blue tubing and/or lights to represent Chi powering it and/or a weapon. many different factions have been released through several sets. Each faction has its own colour scheme and unique characteristics.

Vehicles and structures used by the lion tribe use flame yellowish orange as a primary color, brown for their manes, and different shades of lighter brown for accents and differentiation. White teeth, fangs, and claws are also a recurring attribute. The larger lion vehicles also feature red tongues inside jaws which can open and close. When the lion figureheads are given colored eyes, blue is generally chosen.

Olive green is the color chosen as the dominant one in the Crocodile Tribe's scheme while red is used secondarily for highlights. Different shades of green, such as bright yellowish, dark, and earth are used sparsely. Like the lions, the Croc vehicles generally have claws and teeth, though in at least one set the claws are black and not white.

The eagle tribe's vehicles generally feature white bird-heads with yellow beaks. The body behind will generally be different shades of blue, including earth, bright, and dark azure, though white also appears for accents. Talons are a common feature, either coloured gold or black. Like the lions, the eagles' Chi weapons are mostly blue. Eagle architecture, which does not always include characteristics of real world eagles, generally feature stone structures with arches and smoothed, sloping tops, so long as a minifigure is not meant to be placed on it.

All wolf vehicles released so far feature a full wolf-head build into a truck colored medium and dark stone grey with dark red highlights. Aside from in the head's jaw, white teeth, and fangs can be found around the vehicle at various locations. No Chi powered weapons appear, but according to the story line it is rare that the wolves do use Chi weapons, and when they do, they consider it high-tech. Other notable features of the vehicle are the large wheels and flaming exhaust.

Two of the three raven vehicles are gliders with feather-like wings, Raven beaks, and Chi powered weapons represented with transparent red, as with the Crocodiles. Black is used as a primary color, dark grey for differentiation and a sheet-metal look, and dark red, medium lilac, and earth green are used for highlights, the latter for very subtle ones on one occasion.

70137 Bat Strike, an example of a Speedorz set Speedorz sets include a motorbike-like vehicle with one, blue wheel. A fairing mould, depending on the tribe which will feature attributes both printed and moulded such as beaks, teeth, and eyes, is placed on the chassis and a minifigure will sit in between. On the back, add-ons called Power-Upz can be placed to extend the width or length. Power-Upz include claws, rotors, and flaming exhaust pipes.

Sets featuring Speedorz will often include one or more obstacles and a ramp, in addition to cards, minifigure(s), accessories, and Chi crystals. The challenge will generally consist of an obstacle which needs to be cleared or targets which need to be disturbed in some way or another.

Another component of the theme are constraction (constructable action) figures. There are currently 13, one of each of 2013's tribes(excluding the Bears, Rhinos, and Beavers), and one from each of the 2014's Ice Tribes(excluding Ice Bears), plus a new CHI Laval and CHI Cragger, along with two other fire constraction figures(CHI Panthar and CHI Fluminox). They include a set consisting wholly of the figure featuring an exclusive moulded head and weapons. They are built using a system first introduced in 2011 with Hero Factory's Ordeal of Fire story-arc.

Of thousands of years of peace, Chima is once again torn in conflict because a misunderstanding, and the Crocodile Tribe leads it's allies into battle against the Lions. Soon, Laval the Lion Prince is tricked into throwing the Crocodile's CHI into the "Gorge of Eternal Depth" and more tension comes... Finally after months of fighting the tribes must unite because of a "Black Cloud" threatening Mt. Cavora, the source of CHI, yet when the CHI Falls stop, the Lions are blamed and the final battle for Chima has come. Though, when Laval and Cragger's showdown comes they find themselves falling to their deaths, until Laval sacrifices his life, reminding Cragger of his friendship with him. By faking his death Laval finds the Crocodile Legend Beast one of the eight Legend Beasts which can restart the falls, and returns, much to Cragger's relief. Soon after the Tribes unite as allies to go and save the other Legend Beasts who are trapped in the Outlands. There they find shelter in Lavertus (the exiled Lion's) base and are able to free seven, until it is revealed that the CHI Laval threw was what created this new enemy that had trapped the Legend Beasts, the final Beast is saved and the Heroes barely escape, if not for Lavertus who uses his Golden CHI to support the exit and sacrifices his life. Finally the Falls are restarted and Chima is flourishing, that is until Scorm the Scorpion King accidentally awakens Sir Fangar an accent enemy, that was frozen for a millennia.. With plenty of CHI the Tribes are joyful, except for Laval's friend Eris who has dreams about a Phoenix Tribe who are masters of Fire.While at home, Cragger finds his swamp under attack by the reawakened Ice Tribes, and hardly escapes with his Sister (who had secretly been the real reason for war in Chima in the first place). The Tribes try to fight back, but find themselves defenceless against the forces of Ice, until Eris convinces Laval and Cragger to go inside Mt. Cavora, because of her dream, much to their unbelief they meet Fluminox and discover the Phoenix, who have Fire CHI, the secret to the Ice Tribes' defeat, now the battle is on and the fate of an eternal Ice Age is in the 8 Heroes' hands.They manage to hold the Hunters back for a while,until the Hunters trapped the Phoenixes and blocked the ways to the Fire Chi,so they were able to spread in hole Chima.When the Phoenixes were freed,the 8 heroes started searching for the 8 Fire Harnesses,artifacts for performing the Great Illumination,an ancient ceremony that could cure the Hunters and make them good again.Also,the Hunters released the Ice Bears,the most powerful tribe in Chima,but they were defeated by the normal Bears.After the 8 heroes found the Harnesses, they flew into Mt. Cavora and performed the Illumination, transforming Flinx into the Ultimate Phoenix and curing the Hunters. The Phoenixes then left Chima and all of Chima's problems were solved, though it was shown that Chima was only a small part of a larger world...

Other Legends of Chima Media

The protagonists released in the first wave

The antagonists released in the first wave 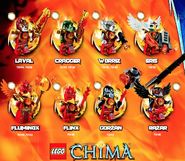 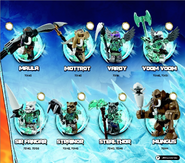 A display showcasing the theme 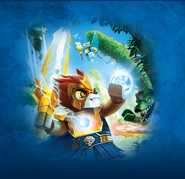 From left to right: Laval, Eris, and Cragger on a promotional poster

A teaser image with Laval's silhouette 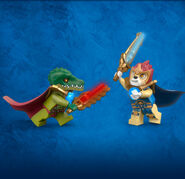 Another image depicting a fight between Laval and Cragger

A promotional image showing a darkened fight between Laval and Cragger 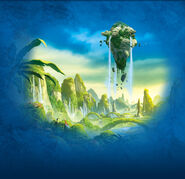 A promotional image of Mount Cavora 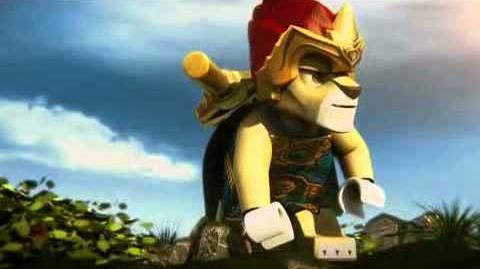 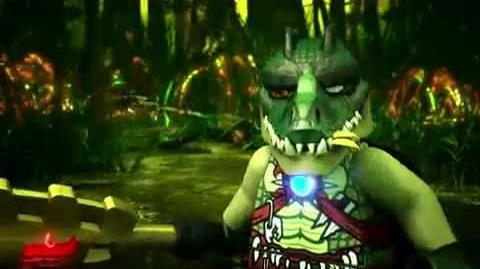 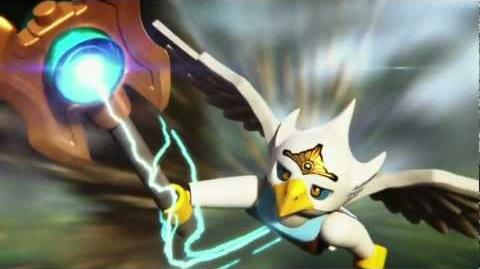 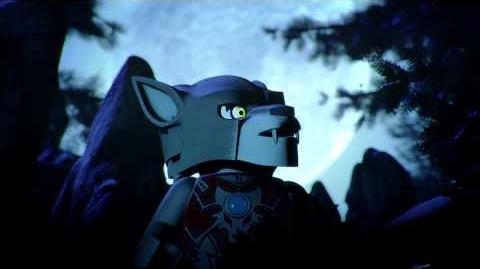