Leonardo is a Teenage Mutant Ninja Turtles minifigure first released in 2013. He is the leader among the four turtles.

Leonardo's head is a new mould made for the turtles. It is dark green with a blue bandana around it. In 79104 The Shellraiser Street Chase he has an angry expression in which his teeth are bared and clenched, but in 79103 Turtle Lair Attack he is frowning. He wears a new turtle shell piece made exclusively for the Teenage Mutant Ninja Turtles line. It is khaki, has a turtle shell pattern and has two brown straps over the piece. The front of Leonardo's torso piece is green with turtle scales and a continuation of the strap pieces from the shell piece. The back of the torso features turtle scales and a brown strap at the bottom. His legs are green, just like the rest of his body, and finish off the scale printing. The legs have printing of brown knee pads.

Leonardo was formerly, along with his three brothers, a normal turtle, who was bought in a pet store by Splinter, when he was a human named Hamato Yoshi. Yoshi then saw many strange men (The Kraang) meeting. Those men carried a mutagen and when confronted by Yoshi, it was dropped onto the turtles spilled cage and Yoshi. The mutagen mutated Leonardo and his three brothers into larger, more intelligent mutants, while turning Yoshi into a giant rat also known as Splinter. He then hid out in the sewers for 15 years, until the 4 turtles persuaded Splinter to let them go up to the surface. In the show, he is one of the main protagonists alongside his 3 brothers. He is the leader of the turtles simply because he asked Splinter first. Leo later on, develops an obvious crush on Karai, The Shredder's daughter. 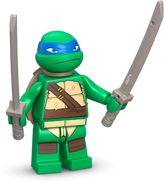 A CGI of Leonardo 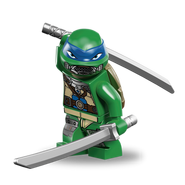 A CGI of the Diving Gear Variant 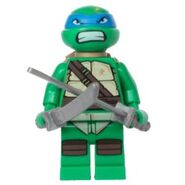 Leo with the katana blades 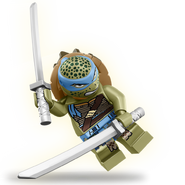 Leo Movie CGI
Add a photo to this gallery