"Crocodiles! Wolves! And Ra-a-a-a-avens!"
―Leonidas in reply to Lagravis when the Lion Temple was under attack

Leonidas is a Legends of Chima minifigure released in 2013.

Leonidas has beige arms, torso, and legs, and white hands. His toes have markings of lion-like toes, and he wears a blue kilt with golden and black markings, and bands on his knees. Over his chest, he wears a blue belt with a golden brooch, and in the middle of the brooch, there is a blue stone. His chest markings are white and muscular-looking. Leonidas has a spiky orange mane of hair with a dark blue border, his face is beige, and he has a white muzzle. His nose is black, and he has a small chin hairs under his mouth, which has a goofy smile. Leonidas eyes are orange, he has a double sided face on one side he has a goofy smile and on the other he has a confused expression. 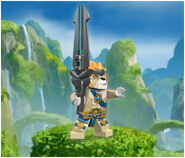 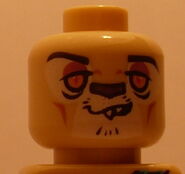 Leonidas in Legends of Chima: The Animated Series

Retrieved from "https://brickipedia.fandom.com/wiki/Leonidas?oldid=2017160"
Community content is available under CC-BY-SA unless otherwise noted.
... more about "Leonidas"
RDF feed
Accessories
Chi Jabaka
Katar
Valious +
Appearances
70001 Crawley's Claw Ripper
70006 Cragger's Command Ship
70014 The Croc Swamp Hideout
70102 Chi Waterfall
30253 Leonidas' Jungle Dragster +
ArticleRating
3 +
Image
Leonidas.jpg +
InfoboxTemplate
Minifigure +
ShopDescription
Leonidas
Leonidas is a Lion foot … Leonidas<br>Leonidas is a Lion footsoldier and guard. Leonidas is not dumb. He just can't keep more than two ideas in his head at one time. If you give him a command – "Guard the entrance to the Temple" - he will execute it efficiently and without question. However, if you then give him a second command – "Clean your sword at the same time!" – he will get completely confused. He's the kind of guy who actually CAN'T chew gum and walk at the same time. But if you just want him to walk OR chew gum? He will do each of those individual tasks with more gusto than anyone else.al tasks with more gusto than anyone else. +
Theme
Legends of Chima +
Title
Leonidas +
Years
2013 +