Brickipedia
Register
Don't have an account?
Sign In
Advertisement
in: Class 3 articles, Minifigures (theme), Minifigures introduced in 2012,
and 2 more
English

"Sure, I’ll show you where my gold is hidden! Just close your eyes and spin around three times…"
―Leprechaun

The Leprechaun is a Collectable Minifigure released in 2012, as part of 8827 Minifigures Series 6.

The Leprechaun comes with a newly decorated green top hat with a buckle around the center. He has an orange beard printed on his face, and a green torso that has a lime green bow tie and a three-leafed clover printed on it. He has green short legs, which makes him the fourth Collectable Minifigure to have short legs. His accessories are a new brown pot/cauldron that comes with three, one by one stud pieces of gold.

Leprechauns are mythical creatures from the Irish mythology. They orignally wore red, rather then green clothing, and had blonde hair instead of orange. They originally worked for Fairies and fixed their shoes. The Fairies paid the Leprechauns in gold coins which the Leprechauns placed inside their pots. If a Leprechaun is caught he would give you his pot of gold. In the current ages Leprechauns wear green and have orange hair (which appearance, this minifigure is based off). They live at the bottom of the rainbow, and if you catch them like in the older times they would give you gold. 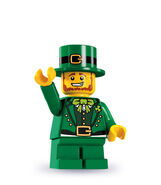 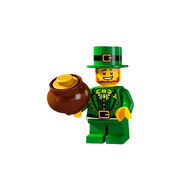 The Leprechaun with his pot 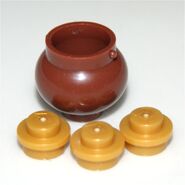 The Leprechaun's pot of gold