Pirates of the Caribbean: On Stranger Tides

Lieutenant Theodore Groves is a Pirates of the Caribbean minifigure released in 2011.

Theodore Groves has the same head as 2009 Indiana Jones. He has a tricorne with a plume, white unprinted legs. His torso is similar to the 2009 Imperial guard, but without belts and a bag on the back, while he has two breastplates attached on the each side of his red jacket and has a white shirt. He also has gold pauldrons. He also has a flintlock pistol, a cutlass and a white scabbard.

Groves was a part of James Norrington's crew on the HMS Interceptor. He witnessed the escape of Jack Sparrow, who he referred to as the best pirate he has had ever seen, and Will Turner and the theft of the Interceptor. He later participated in and survived the battle against Hector Barbossa's and the cursed crew of the Black Pearl.

Sometime later, Groves joined Cutler Beckett's EITC armada as first mate aboard the HMS Endeavour. During the skirmish off the Black Sand Beach, he asked Beckett for orders but the main mast collapsed and was once again awed by Sparrow's escapes. He also participated during the battle of Calypso's Maelstrom. After the defeat of the Flying Dutchman, the Black Pearl attacked the Endeavour with the Flying Dutchman, now under command of Will Turner. As the Endeavour was slowly exploding, Groves asked Beckett for orders. With Beckett paralyzed, he gave orders to abandon ship himself and survived while the rest of the armada soon retreated.

Afterwards, Groves was promoted to lieutenant commander and was present during what was supposed to be the hanging of Joshamee Gibbs. On the Whitecap Bay, Groves tried to save the HMS Providence and many of its crew from the mermaids, but it was too late. He also rescued Sparrow and Barbossa from the Spanish when they sought to steal the Chalices of Cartegana. Groves fought at the battle at the Fountain of Youth where he battled against Blackbeard's crew and successfully defeated a pirate, but almost a half of his own crew died, including Lieutenant Gillette. As the Spanish arrived, Groves ran up the Fountain, holding a Union Jack in his hands and proclaimed the Fountain a property of King George II, but was shot by The Spaniard. As the Spanish began destroying the Fountain, the British retreated and Groves was carried away by two officers of the HMS Providence. 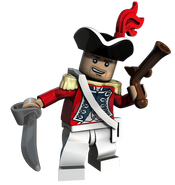 Groves' token
Add a photo to this gallery

Retrieved from "https://brickipedia.fandom.com/wiki/Lieutenant_Theodore_Groves?oldid=1978217"
Community content is available under CC-BY-SA unless otherwise noted.
... more about "Lieutenant Theodore Groves"
RDF feed
Accessories
Tricorne
Flintlock Pistol
Cutlass
Scabbard
Pauldrons +
Appearances
4193 The London Escape
853219 Pirates of the Caribbean Battle Pack +
ArticleRating
2 +
Image
poc018.jpg +
InfoboxTemplate
Minifigure +
ShopDescription
This Officer is a proud soldier of King George’s army and will stop at nothing to lock up pesky pirates. More than any other outlaw of the Crown, the elusive Captain Jack Sparrow really gets his bricks in a bunch. +
Theme
Pirates of the Caribbean +
Title
Lieutenant Theodore Groves +
Years
2011 +