Life of George was a free iOS/Android app released on October 1, 2011, which tied in with the set 21200 Life of George. This was the first set to combine LEGO bricks and an application, and paved the way for the sets of themes like Fusion. 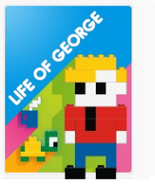 Retrieved from "https://brickipedia.fandom.com/wiki/Life_of_George?oldid=1811890"
Community content is available under CC-BY-SA unless otherwise noted.