Garth Ranzz comes from planet Winath, where everybody has a twin, with the only exception in the whole planet being his older brother Mekt Ranzz. During a trip to planet Korbal, Garth, his twin sister Ayla, and Mekt were attacked by the local electric beasts, but luckily all three survived and got electric powers.

Some time later, Garth was traveling in a passenger ship that also carried philanthropist RJ Brande. When telepath Imra Ardeen found about a plot to assassinate brande, Garth and Rokk Krinn stopped the attempt on Brande, who suggested the three teenagers to form a team, so they became the founding members of the Legion of Super-Heroes, Garth as Lightning Lad, Rokk as Cosmic Boy, and Imra as Saturn Girl. 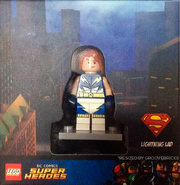 Lightning Lad in the packaging box.