Lightor is a Rama alien minifigure from the LEGO Racers theme. Lightor appeared in the video game LEGO Racers 2 as a CPU racer on Xalax.

Lightor is the fastest of all the Ramas, infact, he is so fast that when he reaches maximum velocity nobody can catch up to him. 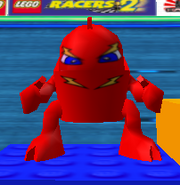