A Lightsaber is a weapon used in the Star Wars line. Lightsabers consist of two pieces; the hilt and the blade. Most lightsabers use Part 23306 for the hilt. However, Asajj Ventress and Count Dooku use special pieces for their oddly-shaped hilts.

The blade of a lightsaber is unique in that it is made of a tight loop of pure energy, and can cut through anything save another lightsaber and certain rare, exotic materials. Lightsabers are most often used by Jedi, Sith, or other Force-sensitive beings, as their blades have no weight and are extremely dangerous to handle. Usually, only one lightsaber is wielded, although General Grievous often fought with four lighsabers (even though he was not Force-sensitive, his robotic arms and mind had enough coordination and speed to compensate), one in each of his hands. Darth Maul, Savage Opress, and Satele Shan each used a double-bladed lightsaber; Pong Krell used two double-bladed lightsabers. Some, like Asajj Ventress, carried two single-bladed lightsabers.

In the years before 2005, all lightsaber hilts were made with a chrome finish. Between then and 2008, they were mostly Medium Stone Grey. Since 2008, some sets have had flat grey hilts while others have a metallic look. Chrome is still used, but it is uncommon. Various other colors also appeared as hilts. Palpatine's lightsaber's hilt in 9526 Palpatine's Arrest was the first to be Warm Gold, and Jek-14's was the first ever in white. The piece has also been produced in Grey (in 2001) and Black, though neither was used as an actual lightsaber hilt.

Lightsaber blade colours are rather varied. Blue and green are the most common among Jedi; Sith use red. Until around 2012, green lightsabers were Transparent Neon Green. Since then, Transparent Bright Green has been used for green blades. Darksabers use Black blades.

Minifigures that use Lightsabers

Sith and Dark Side Supporters 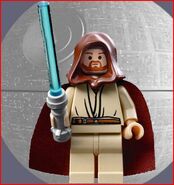 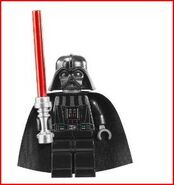 Mace Windu with his purple lightsaber. 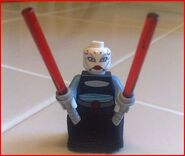 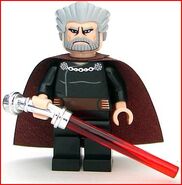 Darth Maul with his double-bladed lightsaber.

General Grievous wielding the lightsabers of 4 Jedi he killed. 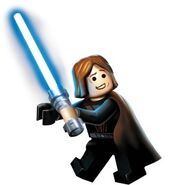 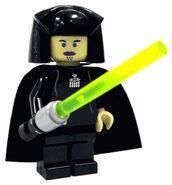 Luminara Unduli with a light-up lightsaber. 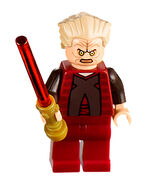