Brickipedia
Register
Don't have an account?
Sign In
Advertisement
in: Class 3 articles, Ninjago Minifigures, Minifigures introduced in 2016,
and 2 more

Lil' Nelson is a young boy from Ninjago: Masters of Spinjitzu who is an ally of the Ninja.

The Ninjago City Docks version of Lil' Nelson reuses the white Wu-Cru torso, has short white legs, and comes with an arm cast.

Lil' Nelson first appears in the episode "Infamous", where he is in the hospital with both of his legs in casts. The Ninja visit him in order to grant his "wish"-won through a contest-of being named "Honorary Ninja for a Day", which he receives in a purple gi he has made himself. The "Purple Ninja" subsequently helps the Ninja reach a stairwell so they can try and escape their fans and the paparazzi who come to the hospital searching for them after Kai exposes their location through a social media status update.

Some time later, Nelson got a job as a paperboy working in Ninjago City, and was partnered with an older girl named Antonia. The two find themselves delivering papers during the invasion of the Pyro Vipers, with Antonia stressing the importance of their task. After the two encounter Clutch Powers and discover that the Ninja are trapped in a pyramid in the Desert of Doom, Nelson becomes determined that they get to the Monastery of Spinjitzu and alert Master Wu. Antonia reluctantly agrees, and they make their way through a gauntlet of construction and attacking snakes to accomplish the mission. Wu is grateful for the news, and Nelson is thrilled when Wu notes that Nelson's determination reminds him of Lloyd.

In the Prime Empire Original Shorts, Nelson and Antonia attend Vlad Tutu's dance class along with Nya and Jay. Later, Nelson is among the Ninjago City residents caught up the Prime Empire craze, and notes that his mother has likewise become interested before noting with some worry that he hasn't seen her for some time. Nelson is then among those who becomes drawn into the video game and ends up as a spectator of The Speedway Five-Billion.

In Papergirl, Nelson is stunned to learn that Antonia intends to quit her job as a papergirl and work at an ice cream parlor, particularly after all she taught him about the importance of their work. Antonia, however, is disillusioned, and notes that the new job will offer better pay and less danger from the constant menaces to Ninjago City. In the midst of what is supposed to be her last day, however, the pair become caught up in a struggle between Kalmaar and the Ninja for possession of the Storm Amulet. Ending up with the artifact, they manage to keep it out of Kalmaar's clutches for some time, and Antonia saves Kai after he nearly drowns. To Nelson's delight, Antonia decides not to leave after all, giving them the opportunity to continue working together. 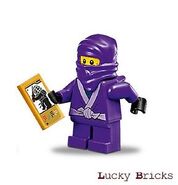 Lil' Nelson in his Ninja attire