A lion is a type of animal. They have currently first been released in a DUPLO form. 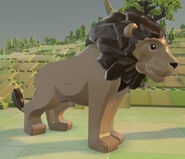