The Lion King's accessories and clothing are very similar to the Crown King, as he wears a chestplate, a golden crown with a red plume, and carries a golden sword. His head has unique printing for his face, making him look solemn and dignified. He bears the same face as the Wizard (Kingdoms). In 7188 King's Carriage Ambush, he has a different torso and leg pieces. 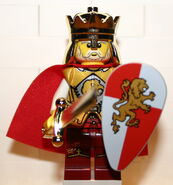 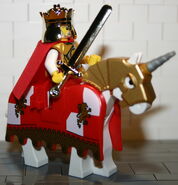 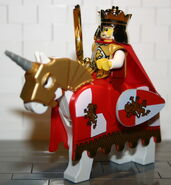 The King from King's Carriage Ambush

The back of the King from King's Carriage Ambush

The King on his Horse 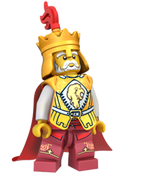 Retrieved from "https://brickipedia.fandom.com/wiki/Lion_King?oldid=1296716"
Community content is available under CC-BY-SA unless otherwise noted.