Brickipedia
Register
Don't have an account?
Sign In
Advertisement
in: Class 4 articles, Articles in need of expansion, Articles with conjectural titles,
and 3 more

The following is a list of vehicles that appear in Ninjago: Masters of Spinjitzu and The LEGO Ninjago Movie.

Lord Garmadon's unnamed mech is a large mech constructed for him by the Stone Army, appearing only in The Last Hope. It seems to be modeled after Garmadon himself, as it's head resembles his helmet and it has four arms. It is later disabled by an energy blast from Lloyd.

The Hammerhead Gunship is a helicopter and troop transport employed by the Shark Army in The LEGO Ninjago Movie Video Game.

The HunterBuggy is a small four-wheeled vehicle employed by the Dragon Hunters.

The HunterJet is a small aircraft employed by the Dragon Hunters.

Protocol Kaiju is a larger mech, resembling a more massive version of the Samurai X Mech, employed by P.I.X.A.L. in The Kaiju Protocol. It was evidently created to deal with giant monsters such as have often plagued Ninjago. P.I.X.A.L. used it to battle the Preeminent, which had escaped from the Departed Realm and begun attacking Ninjago City. After an intense battle, in which the mech's arm was ripped off, P.I.X.A.L. plugged the mech directly into the city's power grid. The boost in energy allowed her to overpower the Preeminent, which she then dragged back to the Monastery of Spinjitzu.

Protocol Kaiju is equipped with an arm-mounted laser, HALO jets, missiles, a katana with an energy blade, and a circular blade on its right arm resembling that of the Samurai X Mech. The mech interfaced directly with P.I.X.A.L.'s systems, which made her plugging into Ninjago's power grid incredibly dangerous, as it had the potential to burn her out along with the mech. However, the flow of energy also allowed the mech to unleash an explosive kick that stunned the Preeminent.

In The Call of the Deep, P.I.X.A.L. made use of the mech to accompany Zane, flying in the ShuriCopter, on a rescue mission out on the Endless Ocean. Encountering a giant octopus attacking a ship, P.I.X.A.L. attempt to reason with the usually gentle creature only to be grabbed in its tentacles. A pulse of energy (revealed in Five Thousand Fathoms Down to be the result of attempts to awaken Wojira) affected the creature and caused the mech to short out, and it began to sink into the depths. Fortunately, P.I.X.A.L. was able to reactivate the mech through a method Nya had taught her: punching the control panel. This allowed the mech to return to the air above the ocean surface just in time to avoid being crushed by ocean pressure, and P.I.X.A.L. noted that she would consider pressurizing all the vehicles she and the Ninja used in the future.

Ronin's Wojira was a mock version of the serpent Wojira created by Ronin and various Kryptarium Prison inmates whom he recruited to work for him. The purpose of this construct, which was essentially only a boat with various additions to make it look like a sea monster, was to blackmail the Keepers into giving up various valuables to them. It was also equipped with catcher claws to enable it to seize boats carrying the Keepers' offerings, allowing it to tow them into the cave where Ronin and his henchmen were located. After Ronin's scheme was discovered by the Ninja, he attempted to flee in the fake Wojira carrying away his stolen wealth, only to be rammed by Twitchy Tim in a Battle Catamaran, resulting in the destruction of both vessels.

The Serpentine Bus is a bus featured in the Ninjago: Masters of Spinjitzu TV series. It served as the means of transportation when Skales led the Serpentine to the city of Ouroboros. Its headlights resemble snake eyes, and it has a "mouth" with a snake tongue. Lloyd Garmadon found the bus in the back of an alley as the Serpentine were boarding it. He ran into a shop and bought a snake outfit that made him look like Rattla in order to sneak onto the bus without being noticed. When they arrived at Ouroboros, however, he was discovered and captured, by Mezmo. It later reappeared in Ninjaball Run where it is used by Fangtom, Skalidor, and Acidicus to break Skales out of prison before becoming caught up in the titular event. The generals later pick up Lord Garmadon using the bus. 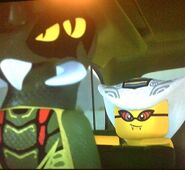 Lloyd Garmadon and Lizaru in the bus.

The Shark Army Shield Crab is an upgraded version of the Shark Army Crab built to project an energy shield. Several of them operate in tandem to protect the Shark Mech in The LEGO Ninjago Movie Video Game.

The Vermillion Airship is a vehicle utilized by the Vermillion and their leaders, Acronix and Krux, to travel from place to place. It consists of a large balloon with an open air gondola slung underneath.