Brickipedia
Register
Don't have an account?
Sign In
Advertisement
in: Articles in need of expansion, Television episode only minifigures, Friends figures

This is a list of Friends characters who appear only in animation, having never received a physical Mini-doll figure.

Chef Pierre is the chef at the Grand Hotel, though he is not in the set. In Letters of Love, he is romantically interested in Ms Stevens, whose life he saved. They sent many postcards to each other, before Andrea sets them up on a roller-skating date, however both he and Ms Stevens break their legs. But they both still seemed to enjoy it. He has a horrible habit of referring to himself in the third person.

Fiona is a character from the LEGO Friends episodes

Fiona was first introduced when Mia saved Fiona's dog twice and then her horse. Fiona started to be too grateful and followed her everywhere. Mia thought she was just loud and a little unbearable, but she said that she can't be grateful forever. Fiona tried to help Mia everywhere and every time, but she often made the situation much worse. But when Mia told her to stop, Fiona disagreed - "until she pay her a debt". From that Mia and her friends suggested that she will never stop, and Mia started to get desperate. So Stephanie created a plan - the girls will make up a situation, in which Fiona will be able to rescue Mia.

When their plan fails, the girls tried to solve things at the Cupcake Café, and they were talking about how Fiona stalks Mia, but Fiona heard them. The girls found that out and they apologised to her. She revealed to them that everybody derides her, and she thought that Mia would be different. Mia persuaded her to go with them to the riding club for the Bell Fontaine ball, and the girls helped her learn to dance and improve her behavior.

At the end of the ball, during Mia's performance with the children's horse riding club she leads, the children's ponies went wild and Fiona saved them with her personal and distinctive leading ability.

"Girls! Girls! I simply don't get them!"
―Jacob

Jacob is a character who appears in LEGO Friends of Heartlake City. He is Olivia's love interest.

Jacob has brown hair brushed to the side. He has cream skin. His eyes are blue, and his eyebrows are brown. He wears a light blue short-sleeved t-shirt, with a white aeroplane in the far corner. He wears dark blue jeans, leading down to his ankles. He wears white shoes.

His father started a flight school, to which Jacob is Stephanie's flight partner. Jacob wants to be a pilot when he's older. He has a crush on Olivia, and she likes him back.

Lacy is a character who appears in the LEGO Friends of Heartlake City.

Lacy wears a black horse riding helmet over her light brown hair, which is tied in a bun. Lacy has cream skin. She has brown eyes and dark blonde eyebrows. She wears pink lipstick. Lacy wears a navy blazer, underneath her blazer she wears a maroon scarf with gold horseshoes printed on it. She wears white pants and knee length black boots.

Lacy has only appeared in LEGO Friends of Heartlake City and is the main antagonist of the series. She was rude to Mia through out various episodes. She entered the horse riding competition against Mia. She won it, although Mia was not rude to Lacy which confused her. Lacy was lastly seen dancing at Andrea's performance. She was uncomfortable at first, but when she saw her and Mia's horses together and when Mia winked at her, she started dancing.

Lacy seems to get along well with Stephanie, since she takes ballet classes with her, and wanted to cheer her up when she saw her sitting by a lake by asking her if she would like a ride. She remembered Stephanie's birthday, and gave her a gift which consisted of baking goods when she met up at her at the ballet studio. Then at her birthday party, Stephanie wanted her to stay for a while, and Lacy said yes. She seemed like she had a lot of fun, because she looked amazed at the lights. She talked to Emma a little as well. She was last seen in the "The Grateful Dud" episode applauding for Fiona and also talked to Stephanie.

Lacy seems like she has been put down a couple times in her life, so she is distant to others. But she can be a soft, kind and caring girl who just needs more support in her life, and just be herself.

Mr. Mayor is a character who appears in the LEGO Friends of Heartlake City film series. He is voiced by Jamieson Price.

Mr Mayor has short dark brownish grey hair. Mr Mayor has cream skin, orange eyes, grey eyebrows, and a grey beard. He wears a black suit which has grey stripes. Underneath his suit he wears a white shirt and tie. He wears black pants with grey stripes and black shoes.

Mr. Mayor has only appeared in LEGO Friends of Heartlake City. He is the mayor of Heartlake City. He is very excited about the World Petacular, which is one of the biggest events held in Heartlake. When Scarlett (Olivia's puppy) ruins one of the stages and sevreal posters he asks the girls (Andrea, Emma, Mia , Olivia, and Stephanie) who was responsible for Scarlett's actions. Stephanie tells him that everything is under control..almost and she has a team to fix thing. Mr. Mayor walks off confused. Mr. Mayor is last seen dancing at Andrea's performance. 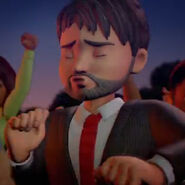 Tanya is the secondary antagonist of LEGO Friends: The Power of Friendship and is Stephanie's rival. They are very much alike, but Tanya is snobbier. Tanya likes baking, singing, and being bossy. She has a band with her friends called the Teardrops (in which she sings). Tanya can also speak French, as seen in "Rabbittouille".