Lloyd Montgomery Garmadon is a Ninjago character first released in 2012, and has had four different variants based on him.

Lloyd has short black legs, and a cape shorter than those that are used on taller minifigures. He has a torso, similar to that of Lord Garmadon's, with a small green 5 in the upper left corner of his torso. Lloyd has yellow hands and carries his father's golden thunder bolt from 2256 Lord Garmadon in 9443 Rattlecopter. He has a turn-around face and is one of the only Ninjago figures to have a turn-around face.

Lloyd ZX has normal green legs with black and silver printings, a green torso with black and silver printings, dark green arms and black hands, black gloves, a green hood with silver visor, titanium metallic armour and some back printing portraying his golden dragon symbol. He has the same head as his earlier version and is one of the few figures to have a turn-around head.

Lloyd ZX (Ultimate Spinjitzu Master) has golden legs with black and green designs that show his pants and green belt. His torso has similar gold, green, and black printings and his face is different than his other faces. His hood and visor are gold as is his armour. His face is golden with black eyes, and black eyebrows. His arms, hands, and skin are golden.

Lloyd was the son of Lord Garmadon and Misako, nephew to Sensei Wu and grandson of the first Spinjitzu master. In The Episode "The Green Ninja", Lloyd became the green ninja.

A young, immature child obsessed with candy, Lloyd Garmadon attended the Darkley's Boarding School for Bad Boys. [1] Lloyd accidentally stumbled upon the Hypnobrai and their General, Slithraa, while running away from the ninjas. Slithraa mistakenly uses his mind control on himself when he attempted to control Lloyd but hit a block of ice that reflected the hypnosis, allowing Lloyd to take over the Hypnobrai army for his childish acts in episode 1 "Rise Of The Snakes".

Slithraa's second in command, Skales, and the other members of the tribe were frustrated with their general forcing them to do childish deeds for Lloyd such as collecting all the candy in Jamonacai Village, and building a tree house. After a battle with the ninja, Skales and Slithraa had a battle in the "Slither Pit" in which Skales became general and banished Lloyd from their tribe, who left with a map that he had stolen from one of the Hypnobrai to find the other Serpentine tribes in episode 2 "Home".

He succeeds at this by unleashing the Fangpyre, who helped him with many things such as creating new vehicles and almost turning Ed and Edna into snakes in episode 3 "Snake Bit." After being betrayed by the secret allegiance between the Fangpyre and Hypnobrai tribes, Lloyd decided to unleash the Anacondrai, but only found the last surviving member Pythor P. Chumsworth, who became his "best friend", to betray him. He was then rescued by the ninjas. In episode four "Never Trust a Snake", he chooses to help his uncle Sensei Wu, after being read a book also titled "Never Trust a Snake".

The next day, Sensei Wu puts him up to prank the ninjas for today's lesson to show them the destructive power of rumours and that jumping to conclusion can only lead to trouble. Then Wu says that he misplaced his lesson book, but when Kai found the lesson book from Lloyd's pocket, he found out that he stole it. Then Lloyd says that it was a perfect plan until the ninjas had to mess him up, after which Cole closes the door in front of Lloyd in his room interrupting him. When Nya calls the ninjas to the HQ lobby, she talks about Pythor trying to get all five tribes united. This makes Lloyd feel guilty and he probably feels sad or worse in episode 5 "Can Of Worms." At the end he washes Zane's suit until it was no longer pink. Lloyd gives Cole a can of nuts to say sorry, but Cole says there is a bunch of toy snakes inside. Then he walks to the fridge and opens the fridge. When opened, a bunch of toy snakes pop out and everyone laughs, even Cole.

In Episode 6: "The Snake King", he is taken into "babysitting" by Kai. When he drops Lloyd off at an arcade so he can look for Samurai X, he overhears Skales talking about a lost city. Buying a headdress, he follows Skales to the city, where he watches Pythor P. Chumsworth unite the tribes by defeating the leaders of the tribes using Sensei Wu's sacred flute. When he sees Pythor win, he drops his maracas (which were making the snake sound that made the other serpentine believe he was one of them) and is taken captive by the Serpentine. When Samurai X came to free Lloyd, she was not able to escape, she was taken captive by the Serpentine, and forced to fight the ninjas which the Serpentine were sure would come to save Lloyd. Samurai X pretends to fight the ninjas in a plan to save Lloyd, but instead she saves the ninjas and gets the golden weapons to give to the ninjas. Lloyd is still held captive in episode 7 "Tick Tock" and Episode 8 "Once Bitten, Twice Shy". In "The Royal Blacksmiths" the Serpentine use him to get past some traps in a temple so he can be freed, but because the fang blade was gone he was still imprisoned.

In the episode "All of Nothing", Lloyd is forced to try to save the ninja after they were captured getting the Fangblades. During this, he trips on the Green Ninja Suit, rolling right into the Serpentine. Before he can be captured however, Lord Garmadon shows up with the Skulkin Army.

In "Rise of the Great Devourer", he pilots the Bounty after Pythor tries to take the Fangblades. This meant Lloyd was tied to the training equipment and his mouth taped shut by Pythor. Eventually, he is freed, and warns the ninja. But he is too late. Afterwards, he pilots the Bounty (and the ninja) to Ouroborus.

In Episode 18, "Child's Play", the four ninja are turned into children by Lord Garmadon, and to become adults again they must smell some "Tomorrow's Tea." However, when Sensei Wu, who has the tea, finds the small Ninja, they are at a comic book shop with Lloyd battling a Grundle, and have to also turn Lloyd into an adult.

In "Wrong Place, Wrong Time", Lloyd is training with a large arsenal of weapons. Later, Sensei Wu and the Ninja confront Lord Garmadon. Lloyd arrives on the scene and freezes the tip of the Mega Weapon. After the ninja go back in time, a wave of dark clouds looms over Ninjago City, and a picture of Lloyd from a portrait disappears, indicating that he is no longer with the Ninja in the present. His portrait later gets restored. After the ninja destroy the mega weapon, they are sent right back to training with Lloyd. However, due to the Mega Weapon apparently being destroyed, Lloyd has no knowledge that it ever existed.

In "The Stone Army", at the Destiny's Bounty, the Ninja are awakened by their alarm clock, Lloyd tiredly using his powers to break it. Sensei Wu comes into their room telling them that the Ultra Dragon made a mess outside, and the Ninja leave Lloyd to clean up the mess by himself, saying that having a Dragon for a pet takes a lot of responsibility. They ask Lloyd if his mom let him have a pet, to which Lloyd replies saying that he does not remember his mom because she abandoned him when he was young.

One Stone Warrior toy slips out and Sensei Wu chases it down the hallway, though while smashing it, he runs into Lloyd's mother, Misako. When Lloyd exits the merchandise room, Sensei Wu introduces her to the Ninja. Upon meeting, Misako tells her son that she had her reasons for leaving, but Lloyd refuses to listen and leaves to another room to be alone. Misako finds Lloyd sitting at the edge of the bottomless sinkhole exhibit, to which she states that it is where she unearthed the Giant Stone Warrior. Misako explains that she abandoned him in order to learn everything about the Green Ninja prophecy, knowing that Lloyd would be the Green Ninja and wanting to stop him and his father from fighting. That it can work.

In "The Last Voyage", the ninja sail to the dark island on the flightless Destiny's Bounty. Along the way they run into a storm and the ship-eating Starteeth. When the storm passes the ship, which now is missing a rudder and and has a hole in the side, the ship runs ashore on an island with a prison tower. When the ninja get to the top, Dr. Julien greets them and takes them in. Later, the ninja sail further to the island of Darkness.

Lloyd golden with his hood.

Lloyd golden with his hood (without his hairpiece). 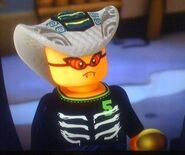 Lloyd in a snake outfit with maracas in his hands.

Lloyd without his hood 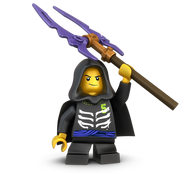 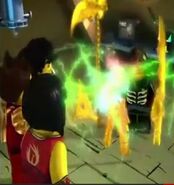 The Golden Weapons showing that Lloyd is the green ninja

Lloyd as he appears in Zane's dream.

Lloyd with the other ninja

Lloyd in the Hypnobrai tomb

On his Spinner, Upgraded 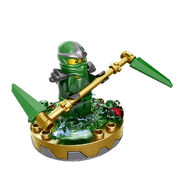 On his Regular Spinner

Lloyd as the Ultimate Spinjitzu Master 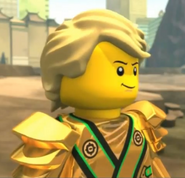