Lobot is a cyborg minifigure from the Star Wars theme, who assisted Lando Calrissian in the administration of Cloud City. The unit on the back of his head allows him to mentally communicate with all droid units in Cloud City. He once was a pirate, but injuries in battle resulted in parts of his body being replaced with robotic parts. His first appearance was in 7119 Twin-Pod Cloud Car in 2002 and has been remade in 9678 Twin-pod Cloud Car & Bespin in 2012.

Lobot's first minifigure from 2002 has the classic yellow skin color, small grey eyebrows and a faint smile. His cybernetic implants are printed on the back of his head and had dark grey and gold coloring. His clothes were grey with tan sleeves and depicted a simple work uniform with a belt. He had no back printing aside from the printing on the back of his head.

Lobot's 2012 variation has the flesh skintone as well as more detailed and personalized face printing. His face is now in a frown and his robotic implements are updated with new printing. His clothes now carry much more detail and there are several dark grey lines representing wrinkles. His sleeves are now colored white instead of tan and he carries a blaster. 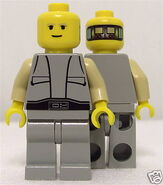 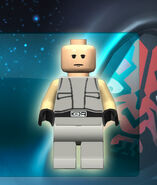 Lobot as he appears in LEGO Star Wars: The Complete Saga

The back of Lobot's head 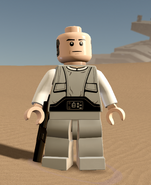