Lok Durd has a blue Neimodian hat with the CIS symbol on it. He has a grey head with red eyes and a black mouth.

Lok Durd was a male Neimoidian arms developer who served as a general in the Separatist Droid Army during the Clone Wars. He was defeated by Republic forces and was taken into Republic custody. Durd, along with Nuvo Vindi, was part of Lieutenant Commander Orson Krennic's original plans for a prisoner exchange with the Confederacy of Independent Systems to secure the release of Galen Erso, Lyra Erso, and the baby Jyn Erso from imprisonment on Vallt. However, Durd eventually managed to escape custody and went on to cause havoc beyond the Western Reaches. 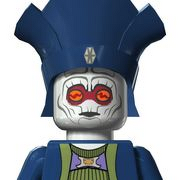