"Kneel before me!"
―Loki in LEGO Marvel's Avengers

Loki is a minifigure in the Marvel Super Heroes theme released in 2012.

Loki's torso, legs and arms are dark stone grey, printed to resemble his armour in The Avengers. He wears a green cape (which is also used by The Mandarin) and a horned gold helmet. He wields a golden staff which is made up of two parts and his head is light nougat and printed with cheekbones and a stern expression.

His appearance is identical in LEGO Marvel Super Heroes, except the sai in his staff is replaced with a glowing blue jewel.

The Marvel Comics version of Loki was the son and heir to the Frost Giant, King Laufey who was disdainful towards his son due to Loki having been born the size of an Asgardian. When Loki was only a child he witnessed his father be slain in battle by Odin who took pity on the young Frost Giant and adopted him as his own son.

In Asgard, Loki was very much ostracized for his lineage while being seen as weak and lesser due to his scrawny but intelligent nature, especially when compared to his step-brother Thor. This lead Loki to assume the moniker of "The God of Mischief" in order to satisfy his darker urges and feelings of invalidation but as the eras passed, Loki's schemes became far less playful and far more evil. Loki attempted to conquer Asgard on multiple occasions but ultimately he was imprisoned within a tree under the orders of Odin where the Trickster remained imprisoned for decades until he was freed during the 1970s.

After this, Loki became intent on destroying his brother and taking his father's thrown by whatever means necessary, even inadvertently forming the Avengers at one point.

Loki was the adopted son of King Odin of Asgard. Odin raised Loki as his own, alongside his biological son Thor, however when Loki discovered his true heritage, he attempted to seize control of Asgard and kill Thor. However, Loki's plan failed, and he was forced into exile.

Some time later, Loki gained control of a Chitauri army through a deal with Thanos, and began an invasion on Earth. His first step was to seize control of the Tesseract, an Infinity Stone which was recovered by S.H.I.E.L.D. decades ago following a mission carried out by Captain America. After he gained control of the cube and took control of the minds of several S.H.I.E.L.D. personnel including Hawkeye, he put them to work on building a machine that would harness the power of the Cube open a portal between Earth and the Chitauri invasion fleet. He was briefly captured by S.H.I.E.L.D., but escaped and seemingly killed Agent Coulson.

However, the Avengers managed to thwart the Chitauri invasion, and Loki was defeated by The Hulk. Thor then took Loki and the Cube back to Asgard.

Thor later got Loki to help him stop Malekith and Algrim the Strong (now Kurse) to destroy the world with the Aether. When they went to the Dark Word, Kurse stabbed Loki, which killed him, but Loki triggered a grenade which sent Kurse into a Black hole.

After Malekith was defeated, Thor reported to Odin that Loki died with honor, and then when he walks away, it is revealed that Loki was disguised as Odin, and he is still alive.

Four years later, Thor found out that Loki was alive. They later returned to Midgard (Earth) in order to find Odin until he later passed away. Hela later shows up and exiled them on Sakaar. Loki later joined with the Revengers (leaded by Thor, Valkyrie, and Hulk) whom wanted to take revenge and in order to stop Hela's reign on Asgard.

After the Silver Surfer's board was turned into cosmic bricks, Loki along with Doctor Doom assembled the villains of the Marvel universe to collect the bricks so they could build Dr. Doom's Doomray of Doom.

Loki then recruited the Frost Giants to help him seize control of Asgard and retrieve the Tesseract. When Thor, Captain America, Wolverine, and the Human Torch came to stop him, he then activated The Destroyer to halt them.

Loki in a Commercial for Marvel Superheroes 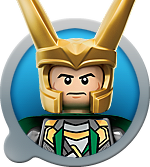 A side view of Loki

Loki and Magneto in front of the Magneto Mobile