This article is about the Minifigure. For the theme, see The Lone Ranger (Theme).

The Lone Ranger has a White cowboy hat, and a Black mask that shows only his eyes and mouth. The face is Light Nougat. The torso has printing on it which shows the sheriff badge on his black shirt, and the arms are also black. The hands are also light nougat. The legs are brown with black printing. He has backprinting depicting the back of his coat.

A slight variation appears in 79110 Silver Mine Shootout. The differences are his face has an angry expression and his clothes are covered in sand. 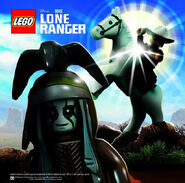 The Lone Ranger on a horse, with Tonto