"Heh, good luck with that, Oh did I say that out loud?"
―Longtooth

Longtooth is a Legends of Chima minifigure released in 2013.

Longtooth has a lion-like head with a scar over the left eye and a brown mane. His torso features printing of the minifigure’s exposed chest, which has claw marks on it, and the top of a gold belt. The legs feature printing of the continuation of the belt, blue kilt, and his exposed lower legs and clawed feet. He is like a Lion version of Winzar. He gets the name Longtooth because of his long teeth.

He appears several times in the show as Lagravis's second in command. In The Hundred Year Moon he asks Skinnet why he isn't inside and doesn't believe what Skinnet says about what the Hundred Year Moon does to him. In Attack of the Ice Clan he has to thaw out a frozen Crug. He gets bored with Crug's stories and vows not to thaw out anyone else. When Lagravis comes in with frozen warriors to thaw out, Longtooth runs out of the temple screaming.

Longtooth's most prominent appearence was in The King Thing, where a sad Laval was misguided and confused about how to be a king. Longtooth, being Lagravis's most trusted advisor, taught Laval the ways of being a king, and steered him in the right direction. However, when Plovar and Cragger tell Laval and Longtooth about the trophy room, Laval and Cragger are in a rush to free their parents, which Longtooth must stop. He informs Laval that he must help each tribe's problems, which quickly overwhelms him. When VoomVoom and Vornon arrive in ice jets, a shocked Longtooth struggles to get the word out to Laval, but eventually informs him of their problem. VoomVoom gives him a letter, then the vultures fly away, leaving their jets, full of ice grenades, to detonate. This begins a full scale assault where Longtooth and many other soldiers are held back by Fangar's new "Sabre Tooth gate". When the Pheonix turns the tide, Longtooth quickly coners Fangar, but he escapes on Mottrot's jet. 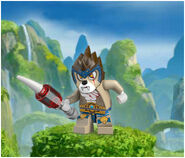 Longtooth in the TV series 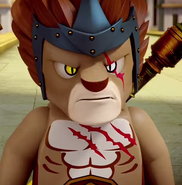