Lor San Tekka is a Star Wars minifigure released in 2016. He was included in the set 75149 Resistance X-Wing Fighter.

Lor San Tekka was a human male explorer and member of the Church of the Force, even though he wasn't Force-sensitive. He discovered a fragment of a map that could lead to Luke Skywalker. Tekka gave the map fragment to Resistance pilot Poe Dameron but was soon captured and killed by Kylo Ren. 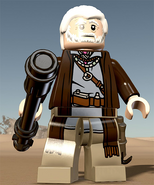 Français
Community content is available under CC-BY-SA unless otherwise noted.
... more about "Lor San Tekka"
RDF feed
Appearances
75149 Resistance X-Wing Fighter +
ArticleRating
3 +
Image
27063535501_92bb3306c6_b.jpg +
InfoboxTemplate
Minifigure +
ShopDescription
A mysterious traveler who remained faithfu … A mysterious traveler who remained faithful to the ideals of the Jedi throughout the long reign of the Empire, Lor San Tekka is an old ally to Princess Leia Organa and one of the only people in the galaxy with information about the location of the long-missing Luke Skywalker. After many years of exploration, he has settled down to hide from the First Order in a peaceful village on Jakku.irst Order in a peaceful village on Jakku. +
Theme
Star Wars +
Title
Lor San Tekka +
Years
2016 +