Lord Krakenskull is a Stone Monster from the Nexo Knights theme released in 2017.

Lord Krakenskull was a very powerful warlord from the old days. He experimented with the Forbidden Powers and merged two together to create Petrifying Quake. Legend has it that Krakenskull was unable to control the power. Krakenskull and his army were turned to stone and buried in a massive earthquake. 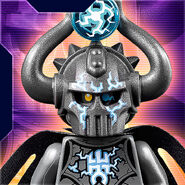