Lord Sam Sinister, also known by many other names including Baron von Barron (or Baron von Baron), Sam Sinister (or Sam Sanister), Evil Eye, Mr. Hates, and Samuel Von Barron, is the main villain from the Adventurers and Orient Expedition themes. Sinister competes with Johnny Thunder in all of the Adventurers sub-themes (except for the 1999 Jungle theme) as they search for ancient artifacts and treasures from around the world.

Sinister has a hook in place of his left hand. He has a monocle over his right eye, a large handlebar mustache (depicted as mutton chops in World Club Magazine comics), and a scar on his left cheek. He generally wears a tan shirt, which slightly resembles Johnny Thunder's torso printing, a pair of white epaulets, and either a pith helmet or an aviator helmet.

In Orient Expedition, Lord Sinister received an updated design. He wears a black version of his original shirt, with a white scarf sporting around his neck, and his pith helmet is replaced with a top hat. His facial printing now sports a small, pointed goatee. His epaulets are entirely removed.

In North America, the character was originally named Baron von Barron in LEGO Mania Magazine January/February 1998.[1] This name is also used in 1998-1999 Shop At Home catalogs,[2] LEGO Racers, Standing Small: A Celebration of 30 Years of the LEGO Minifigure,[3] and 2856195 LEGO Minifigure Ultimate Sticker Collection. This name has been alternatively spelled Baron von Baron, such as in LEGO Mania Magazine November/December 1998 (which uses both spellings on the same page)[4] and the online LEGO Shop descriptions for 5955 All Terrain Trapper and 5975 T-Rex Transport.[5][6]

In the United Kingdom, the character was originally named Evil Eye in Bricks 'n' Pieces March/April 1998.[7] This name is corroborated by 5928 Bi-Wing Baron, which is called "5928 Evil Eye's Bi-plane" in the UK.[8] Bricks 'n' Pieces also advertises an Adventurers cartoon using this name.[9]

In Germany, the character was originally named Mr. Hates in LEGO World Club Magazine March/April 1998[10] as well as in the audio drama Die Jagd nach dem Pharaonenschatz.[11] This name is also used in other countries, as seen in the Danish language version of LEGO Racers (although he introduces himself as Baron von Baron in his opening cutscene)[12][13] and on a Japanese sticker sheet for Dino Island.[14] Notably, this name appears in various English sources, including The Curse of the Mummy - An Interactive Puzzle Book,[15] LEGO Adventures! Magazine Issue 6,[16] and 5774 LEGO Island 2: The Brickster's Revenge.

Starting in the Dino Island subtheme, the character was first called Sam Sinister in North America's LEGO Mania Magazine September/October 2000; confusingly, this issue refers to him as "Sam Sinister (aka Baron von Barron)" despite each name belonging to a separate character in the Egypt line.[18] The name was also used in most 2000-2001 LEGO Shop At Home catalogs[19] and some online LEGO Shop product descriptions for the Dino Island theme,[20] and he would continue to be called Sam Sinister in online media such as The Lost Treasure of Ancient Greece and the LEGO Adventurers Minifigure Handbook. Adding to the confusion, this name is sometimes alternatively spelled Sam Sanister, such as on the box art of 5914 Sam Sanister and Baby T (although the online LEGO Shop calls the same set "5914 Sam Sinister and Baby T"),[20] German and Polish 2000 LEGO catalogs,[21][22] and LEGO Racers 2. World Club Magazine uses both spellings in different issues: Number 2 2000 calls him Sam Sanister,[23] while Number 3 2000 calls him Sam Sinister.[24]

According to a user on Lugnet,[25] the character was known as Alex Gluipstra in the Netherlands during the Dino Island theme.[source?]

The Orient Expedition subtheme would firmly establish Lord Sam Sinister (or simply Lord Sinister) as the character's name, using this name for all printed and online media in multiple languages. This name would continue to be used throughout the 2000s, including LEGOLAND Parks Land of Adventure attractions such as The Lost Kingdom Adventure[26] and Journey to the Lost Temple.[27]

According to a fan website,[28] the character was sometimes known as Ulrich Unhold during the Orient Expedition theme.[source?]

As previously mentioned, the books Standing Small and LEGO Minifigure Ultimate Sticker Collection revert the character's name back to Baron Von Barron for the first time since 2000. However, these books contain multiple errors, such as referring to Slyboots as "Lord Sam Sinister" and "Mr. Hates",[3][29] while The LEGO Book also refers to Lord Sam Sinister as the recurring villain of Dino Island and Orient Expedition.[30] The later 2012 edition of The LEGO Book addressed this by clarifying the difference between the original Sam Sinister and the later Lord Sinister, as well as listing some of their alternate names.[31]

In 2020, the 10273 Haunted House press release[32] and online description[33] refer to this character as Samuel Von Barron, combining his two most well-known names "Baron von Barron" and "Lord Sam Sinister". The designer video only refers to him as Baron von Barron.[34]

In LEGO Racers, Baron von Barron is the boss of the 5th circuit. His preferred tactic is using powered-up blue bricks to shield himself. This is one of the few places he is shown to have a German accent. Much like Captain Redbeard, his in-game model does not have epaulets.

In LEGO Racers 2, Sam Sanister was the boss of the Dino Island world, driving his super-fast Island Racer. He had to be defeated in a race in order to acquire a very powerful power-up for the player's car engine. His epaulets and hook are missing from his model, leading him to be depicted with two normal hands.

In LEGO Island 2: The Brickster's Revenge, Mr. Hates captured Dinosaurs. The player had to save them by flying a hot air balloon, winching them out of cages, and then had to drop sandbags on Mr. Hates so that he would fall off his brontosaurus, which shoots fire to stop you. He spoke in an English accent, and was assumed to be working for The Brickster.

Sam Sinister appears in the LEGO Adventurers Minifig Handbook, which is based on Johnny Thunder's Journal. The journal describes Johnny Thunder's adventures to Brazil, Mt. McKinley, and Colorado River, with Sinister constantly sabotaging their journey and stealing their treasures. In the end, the Adventurers take back the stolen treasures while Sinister is asleep.

Sam Sinister appears as the main villain of this Flash online game on the LEGO Adventurers website. He is given a unique design, resembling his classic appearance but with a black top hat and a red hook.

Sam Sinister follows the Adventurers to Greece, where he plans to steal the Golden Bull of King Minos. He steals the map to the Minotaur's labyrinth and acts as an enemy during the maze minigame. He uses a jetpack to scale a large cliff, only to crash once the jetpack malfunctions, allowing Johnny to tie him up.

In The Lost Kingdom Adventure ride in LEGOLAND California, Lord Sam Sinister appears to be the main villain.

Lord Sam Sinister also appeared in a prominent role of the live musical show, Journey to the Lost Temple.

10273 Haunted House is named the Manor Von Barron and is portrayed as the residence of this character. Samuel Von Barron is prominently featured in the set's marketing and lore. While he does not make a physical appearance as a minifigure, he is depicted in the cursed portrait of Samuel von Barron. According to the set's lore, Samuel von Barron was driven mad by Pharaoh Hotep's bad puns (referencing the ending of Johnny Thunder and the Lost Ruby), leading him to install the Madman's Elevator in his manor.

The computer-generation of Sam Sinister 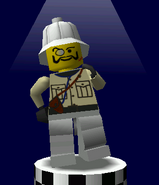