With cape
Without cape

Lord Vampyre is a minifigure released in 2012 as a part of the Monster Fighters theme in which he is the main antagonist.

Lord Vampyre has black legs with printed pocket lines and a black torso with printing of a pocket watch and a red tie and vest over a white, frilled shirt. His arms are also black. He has white hands and wears a black cloak like that used by all other vampires so far. Lord Vampyre sports a white head with a slightly open, fanged mouth, red eyes with grey rings around them and black eyebrows. His alternate face is much the same, but the mouth is closed with his fangs still visible and has different eyebrow positioning. Unlike the Studios Vampire, who sports more traditional spiky Vampire hair, Lord Vampyre has the newer swept-back hair mold. His weapon of choice is a long black sword.He's also have a coffin to sleep in .

Lord Vampyre is the evil ruler of the Monster Realms, with his Bride. He originally planned to give his Moonstone to his beloved wife, but soon unearthed the powers of the spooky Moonstones and built a contraption to eclipse the sun forever, using the magical powers each Moonstone possesses. After he eclipses the sun, all the monsters will be able to roam freely in the Monster and Minifigure realms. So he used his own Moonstone's magical powers to control other monsters, and made them retrieve all 6 of the Moonstones [1]. Lord Vampyre owns a loyal zombie henchman, the Zombie Driver, and an army of man-sized bats called Manbats, who protect his castle [2]. He owns a hearse, of which he uses to roam around the Monster Realms. Lord Vampyre also owns the Haunted House, which is home to his Monster Butler, Zombie Chef, and 2 ghosts. Lord Vampyre is constantly fighting the Monster Fighters, particularly Dr. Rodney Rathbone, for possession of the Moonstones and will stop at nothing to complete his plan.

Lord Vampyre appears in The LEGO Batman Movie as one of the inmates of the Phantom Zone alongside a Swamp Creature and The Mummy. He speaks in a Romanian accent in the film similar to the iconic Bela Lugosi as he tells The Joker that they are listening to his proposition. 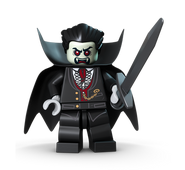 In bed with his wife and the Moonstone

Driving with the Vampyre Moonstone 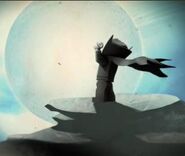 Tapping into the magic of the Moonstone 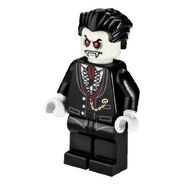 Vampyre without his cape

Retrieved from "https://brickipedia.fandom.com/wiki/Lord_Vampyre?oldid=1961567"
Community content is available under CC-BY-SA unless otherwise noted.