Lotso Hugging Bear is the main villain of the 2010 movie Toy Story 3. This page is based on his minifigure in the Toy Story 3 sets. He has appeared in two variations, making his normal version appearing only in one set and a version covered in printings of dirt appearing in two of the other sets.

Two variants of Lotso have been released, though in both, he takes the form of a big pink bear with big feet, detachable arms with big hands and a white furry stomach. In both variations, his head is shaped like a bear's, having rounded ears on top with white in the middle, a white snout with a dark purple nose, and a grin. He has brown eyes with black and white pupils and dark purple eyebrows. The first variant in 7789 Lotso's Dump Truck features him with his eyes open and clean. He holds a brown stick as a walking stick. The second is dirty and has an evil grin on his face with lowered eyebrows. He has three bits of dirt on his chest, one on his leg, one on his snout, one on his nose, and one under his ear. 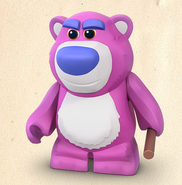 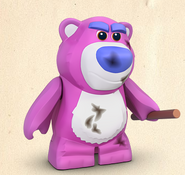 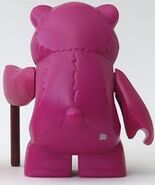