Lotta Brix,[1] commonly referred to as the Reporter,[2] is a female minifigure from the Alien Conquest theme, exclusive to the set 7065 Alien Mothership.

Lotta Brix comes with a clipboard tile and the same microphone used by the Pop Star from 8684 Minifigures Series 2, and the Rapper from 8803 Minifigures Series 3. She has a double-sided headpiece. Her torso is printed with a red jacket and an identity badge. She uses the same hair piece as Agent Swift, Claw-Dette and Dyna-Mite from Agents.

Lotta Brix has written newspaper articles for Chicago Mercury-Pluto-Moon-Gazette and The Washington Click. One chronicled her experience with the Alien Mothership in Chicago, and the other featured her interviewing the Alien Commander at the Washington D.C. Capital Building.[1] 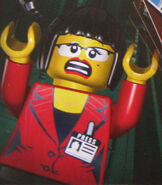