Lieutenant de Martinet is an Imperial Soldiers' character from Pirates. However, He only appeared in media based on the theme, including 6255 Pirate Comic, radio dramas, and Ladybird books.

The Lieutenant wears the classic imperial blue uniform with white trousers, black boots, yellow epaulettes and a black tricorn hat. He wears a very thin long black mustache and keeps his hair tied in a ponytail with a white ribbon.

The Lieutenant is the second in command of the Imperial Soldiers under Governor Broadside. De Martinet is presented as a lazy person, ready to do anything to get more prestige. With these goals in mind, the Lieutenant always faithfully carries out the orders of Governor Broadside who continually promises him career advancements if he will serve him well in his often fraudulent plans to harm anyone (pirates, Imperial Armada, or the Empire themselves they represent).

From the Ladybird's Activity Book

From the third's audio drama cover 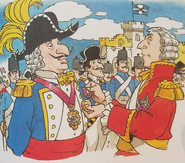