Lucky Larry, or simply Lucky, is a character who appears in LEGO Island 2: The Brickster's Revenge and Island Xtreme Stunts.

In his first appearance in the Game Boy Advance version of LEGO Island 2, Lucky is first seen covered with bandages at the hospital after tripping over a tree stump, tumbling down a hill, getting thrown off the roof of a car, falling down a cliff, landing in the ocean, being knocked underwater, and circling LEGO Island fourteen times due to his trousers being caught on a shark. He then gives Pepper his ticket to Castle Island as he will be unable to make it there due to his accident.

During Island Xtreme Stunts, Lucky Larry can be seen wandering around the area surrounding his house, occasionally tripping over. At one point he buys too many balloons and Pepper has to stop him from floating away.

According to the LEGO Island 3 Character Bible,[1] used for reference during the development of Island Xtreme Stunts, he was originally known as Lucky Luke. His name was changed for legal reasons due to being the same as a character from Asterix. His bio also details him flunking out of medical school, due to the stress of thinking about various illnesses. 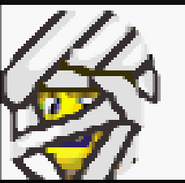 Lucky in the Game Boy Advance version of LEGO Island 2