Luke Cunningham is a Ninjago: Masters of Spinjitzu Minifigure and member of the Sons of Garmadon introduced in 2018.

He first appears, clad in a white-colored disguise, in "The Mask of Deception", in which he and several other Sons of Garmadon-led by Mr. E-steal the Oni Mask of Vengeance from Borg Tower. After most of the group is overpowered by Lloyd, Luke attempted to follow Mr. E in escaping down a zipline. However, his leader cut the line in order to prevent Lloyd from following him, nearly sending Luke to his death until Lloyd managed to catch him. The Green Ninja dropped the criminal in an alley, where he was apprehended by Ninjago City police. In "The Oni and the Dragon", Cole and Zane attempt to interrogate the uncooperative Luke using one of Mystake's teas. Unfortunately, Cole drinks the Truth Tea by accident, but the highly amused Luke inadvertently reveals the Sons of Garmadon hangout. 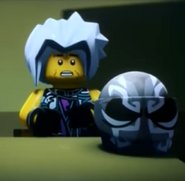